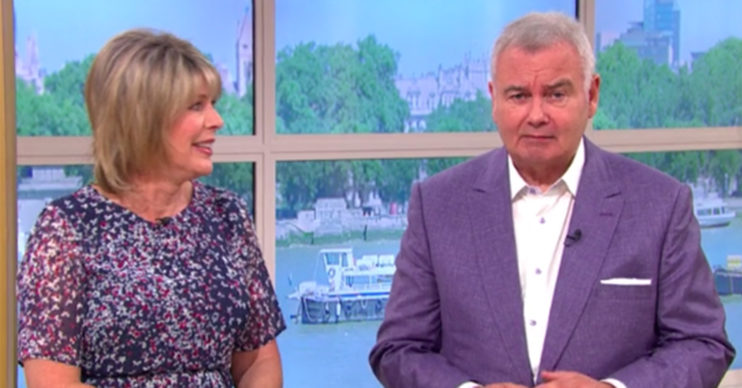 Hosting ITV’s This Morning, the power couple ignited a debate on Twitter over how bacon is cooked best.

Ruth appeared disgusted as she revealed that Eamonn had microwaved raw bacon recently.

She said: “You microwaved bacon the other day!”

A nonplussed Eamonn replied: “And?”

A visibly disgusted Ruth hit back with: “I came downstairs and thought ‘What is this horrible smell?’.

“What is this horrible smell?”

“And did you see the fat splattering inside?”

But her husband reassured her that he had now perfected microwaving bacon.

Read more: Phillip Schofield dresses up for family BBQ with wife and daughters

He explained: “Ah! But I’ve worked out how to do that now. You put a tissue over the top of it.”

He added: “And it keeps it all down.”

Addressing the cameras, Ruth asked: “Do you microwave bacon? I’ve never done that before.”

Before moving onto another subject Eamonn defiantly said: “Well I have! And it tasted fine.”

Some Twitter users agreed with Eamonn, and said it was an acceptable way to prepare the food.

One viewer tweeted: “I cook bacon in the microwave as well and I do get it really crispy.”

Another user agreed with: “I always microwave bacon and eggs… less mess.”

And yet another agreed: “Yes I love microwaving bacon. It tastes better when microwaved.”

However, many more viewers seemingly took offence to the host’s confession.

We've just found out that Eamonn cooks bacon in the microwave 🤭🥓 James Martin does not seem impressed!

Is there anything unusual that you cook in the microwave? We want to know! #ThisMorning pic.twitter.com/QgTinRvDjo

One riled up user tweeted: “If you microwave bacon you are a menace to society #thismorning.”

A second user commented: “Ran a B&B for 16 years and never once cooked bacon in a microwave
– Just Noooo.”

A third chimed in with: “Microwaving bacon… can someone #TellEamonn that it’s wrong.”

And a fourth suggested: “My neighbour does, dreadful, maybe Eamon can’t be bothered to wash up grill or frying pans.”

Eamonn appears unfazed by the mixed reception to his claims.

And he might even be in on the joke.

He retweeted a fan’s response to his one million Twitter followers.

The tweet reads: @EamonnHolmes you can do mushrooms in microwave too. Cooked brekkie… bacon, mushrooms, eggs, beans and tomatoes.”

Another fan pleaded for Ruth to leave him alone over his cooking style.

He playfully replied: “She is…” along with a smiley emoji face.

What do you think of Eamonn’s bacon style? Share your thoughts with us on our Facebook page @EntertainmentDailyFix.