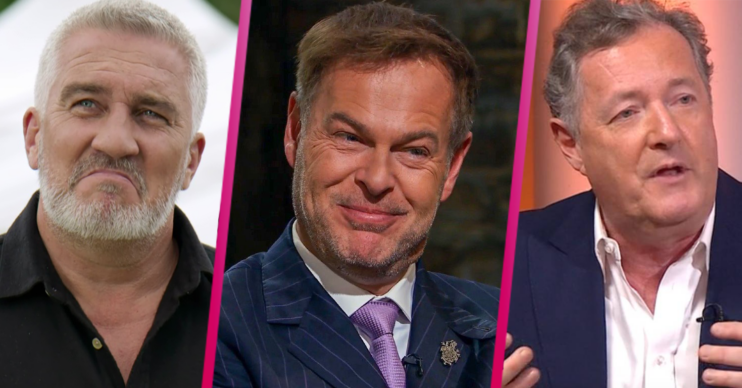 And we've done a lot of research on this one, trust us!

Dragons’s Den star Peter Jones is hands down the hottest of TV’s sexiest men over 50, right?

Tall, dark, handsome, powerful and absolutely loaded, his considered approach to business has our hearts aflutter and our ovaries tingling.

And, after a quick poll of the ED! office, he’s most definitely not the only hottie over 50 in TV.

Read on as we shine the limelight on TV’s sexiest men over 50 and pay tribute to the two in their forties who just got away!

Hunky Peter is 55 and best known for his role on Dragons’ Den.

He’s happily loved up with partner Tara, an interior designer, so it sadly doesn’t look like we’ll be getting a look-in any time soon.

Peter has been married once before, with his marriage to first wife Caroline ending in divorce in 2008.

They had two kids together and Peter has gone on to father three more with Tara.

He helped Tara launch her own business and he’s a romantic too.

On Mother’s Day he shared a pic of her on Instagram and said: “Your unwavering love and support is something the girls and I are so lucky to have. You’re our Mrs Incredible.”

From Dragons’ Den to… Piers Morgan

Love him or hate him, Piers was a popular choice among the women in the ED! office.

His diva-like tantrums and outspoken views on the royals may get tempers flaring on Twitter, but it’s temperatures he sends soaring among his fans.

Piers is currently 56, and married to a total hottie in the form of Celia Walden.

He often pokes fun at Celia on social media, and dotes on his little girl, which just makes us fancy him all the more!

OF COURSE The Chase host was going to be in here!

Bradley is 61 and entirely gorgeous inside and out.

He’s been married to wife Donna for decades but that doesn’t stop us ogling – especially at his “bulge” in that harness on Breaking Dad last week!

Not bad for a sexagenarian, not bad at all!

With his foul mouth and fiery temper we just can’t help but wonder what chef Gordon Ramsay is like in the bedroom.

Pretty active, it seems, given he and wife Tana have five kids.

Gordon, 55, is an avid cyclist so is pretty fit (in more ways than one) and healthy.

His arrogant attitude only adds to his charm.

And we’re not alone in thinking it – last year he topped a poll of Britain’s sexiest TV presenters!

First Dates hunk Fred is sexy – and he knows it.

Fred turned 50 in January of this year and he looks bloody good for it – as a recent saucy selfie in bed will testify!

He’s engaged to be married, but that doesn’t mean we can’t look – especially when he dons Speedos in Gordon, Fred and Gino!

Add in the French accent and we have died and gone to heaven.

The king of the Great British Bake Off can check out our soggy bottom whenever he likes.

He’s a ladies’ man without a doubt, but we can certainly see why Paul, 55, keeps on luring them in.

His piercing blue eyes are hypnotic – we defy anyone in the tent not to fall under his spell!

The ones that got away – and will challenge Dragons’ Den star Peter Jones next year!

Luther star Idris Elba will be joining our round up of TV’s sexiest men over 50 later this year.

He reaches the milestone birthday in September, so is technically in his 50th year, plus we wanted any excuse to “research” him!

He too is 49 but we most definitely can’t see his hotness going anywhere in the next few months.

Roll on next year’s poll – Dragons’ Den star Peter Jones will have to go some if he wants to top it!

Head to our Facebook page @EntertainmentDailyFix and have your say.