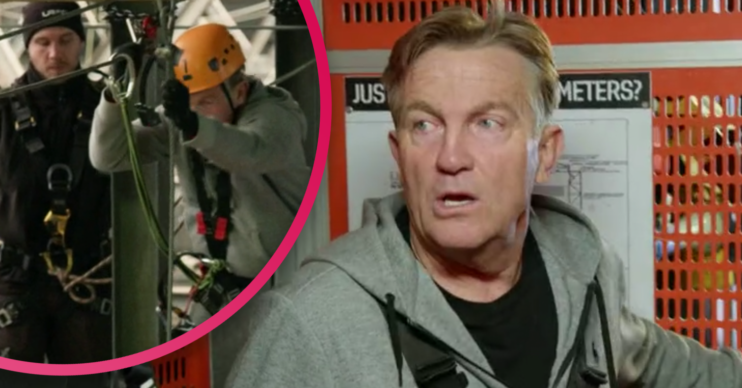 He was wearing a harness for one of the daredevil stunts

The pair were in Denmark, with Bradley and Barney taking on daredevil stunts aplenty.

However, during one such stunt some viewers admitted they were distracted by 61-year-old Bradley’s “bulge”.

What happened with Bradley Walsh and son Barney last night?

The pair were seen at the top of a wind turbine, on a rollercoaster and 50m up in the air in a disused warehouse.

And it was there, as the pair donned harnesses, that the distraction took place.

Bradley was next and, while some felt for the star – who has a fear of heights – others couldn’t help but notice the “bulge” Bradley’s harness created.

In fact, one fan of the show even said they were checking Bradley out – adding the peach and aubergine emoji to their saucy tweet.

How did viewers react to last night’s Breaking Dad?

Sharing a screenshot, one fans of the show declared: “Watching Bradley & Barney: #BreakingDad and the bulge was so distracting.

Another replied to the comment and said: “Glad it wasn’t just me!”

Elsewhere, another fan of the show asked if it was okay to be perving over Bradders.

They tweeted to comment on Bradley’s new grey tracksuit and said: “Is it okay to be checking out @BradleyWalsh in his grey joggers?”

We believe you, thousands wouldn’t!

Meanwhile, fans of the show all had the same complaint about the show, which is just 30 minutes long.

Many took to Twitter to issue a plea to ITV to make the show an hour-long.