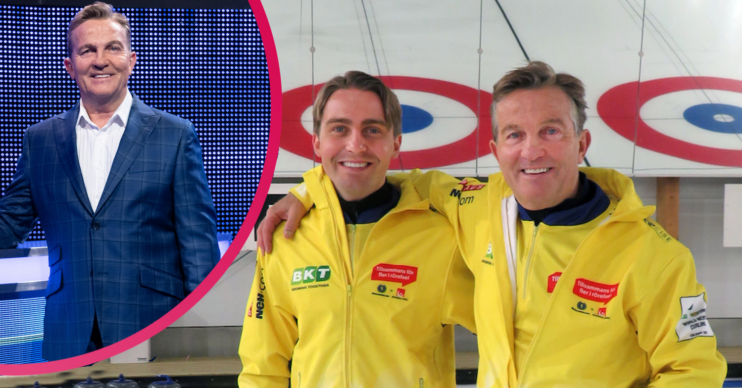 Bradley previously told This Morning‘s Holly Willoughby and Phillip Schofield that he broke his back in three places as he travelled across the US with son Barney in 2020.

He explained that they’d gone along to a rodeo and Bradley somehow ended up on the back of a bull.

But disaster struck when the animal bucked him off with Bradley hitting the floor “like a sack of potatoes”.

When did Bradley Walsh break his back?

He confessed that taking part in an American rodeo had been one of his lifelong dreams.

But he assured viewers that the accident sounds more painful than it actually was.

Bradley, 61, said: “It sounds a bit more severe than it actually is… what happened was, I fell awkwardly, purely my own fault.

“My life’s ambition was to go on a rodeo and they [the show’s crew] always say to me, Barnes says to me: ‘What would you really like to do Dad?’ And I say: ‘I would love to do a rodeo’, because I love cowboy films.”

Read more: Bradley Walsh confesses to ‘cheating’ to get his job on The Chase

The Chase presenter also spoke to The Jonathan Ross Show about the incident and admitted to fearing he’d never walk again.

He said: “When you get to our age, all of a sudden the thoughts of your mortality really come home and I now realise that this time last year I might have come out of hospital not being able to walk.”

Luckily for Bradley, the breaks weren’t serious and he told Holly and Phil that he was up and about “driving the RV” the very next day.

What did Barney say about it?

Barney, 24, also explained how he’d tried to stop his dad from getting on the bull, knowing exactly what would happen.

He said: “I did it first and fell off and it really hurt so I said: ‘Dad can’t do it, it really hurts.’ Dad’s nearly triple my age, and I just thought it’s going to kill him falling off this bull!

Bradley was taken to hospital in Ohio where he made a full recovery.