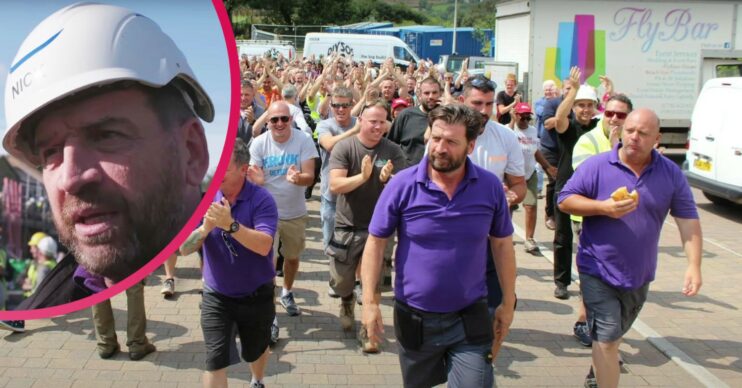 DIY SOS: The Big Build – how many episodes and is Nick Knowles back for good?

After that Shreddies debacle…

Nick Knowles and our favourite home makeover series DIY SOS is back on BBC One tonight (May 10).

Host Nick will also be putting back on his hard hat and steel-capped boots as he returns for a brand-new series.

So how many episodes are there and is Nick Knowles back for good?

Here’s everything we know about the new series.

What is DIY SOS about?

DIY SOS is a home makeover series that not only transforms homes but the lives of others too.

For more than 20 years, viewers have seen Nick Knowles and his team working with volunteers to improve the life conditions of those in need.

Projects have seen everything from walk-in-bathrooms, disabled access and landscaped gardens for people who are a lot less fortunate in the UK.

In the brand-new series of DIY SOS: The Big Build, the team will be renovating and redesigning rooms for a variety of people, from a wife who lost her husband to cancer to a teenager with cerebral palsy.

How many episodes of DIY SOS: The Big Build are there?

There are six episodes of DIY SOS: The Big Build in total.

There was some initial confusion as to whether there was seven episodes.

This is because when tweeting about the show’s return, the DIY SOS account had listed a seventh episode in Scunthorpe.

However, the BBC confirmed that the Scunthorpe episode is a repeat.

Where do they visit?

The new series of DIY SOS will visit a range of locations across the UK.

Is Nick Knowles back presenting DIY SOS for good?

After missing the DIY SOS Children in Need special due to his appearance in a Shreddies TV advert, Nick Knowles is firmly back as the presenter.

He rallied his fans on Twitter, saying: “DIY SOS: The Big Build is back! The new series begins on BBC One [on] Tuesday 10 May at 8pm.”

Talking about his time on the new series, he also said: “I’m so excited we are bringing a series of brand-new episodes to air which were filmed before, during and after the pandemic.

“You can expect the usual camaraderie with lots of emotion and laughter. So many people turned out to help communities and families in need despite their own challengers and suppliers have been so generous. It’s been really life affirming.

“DIY SOS has always been out helping each other which for me was always the story of lockdown, so this is a celebration of people’s fortitude and generosity.

“We live in a hugely generous society and it’s good to be reminded of that in amongst all the bad news we’ve all had to endure.”