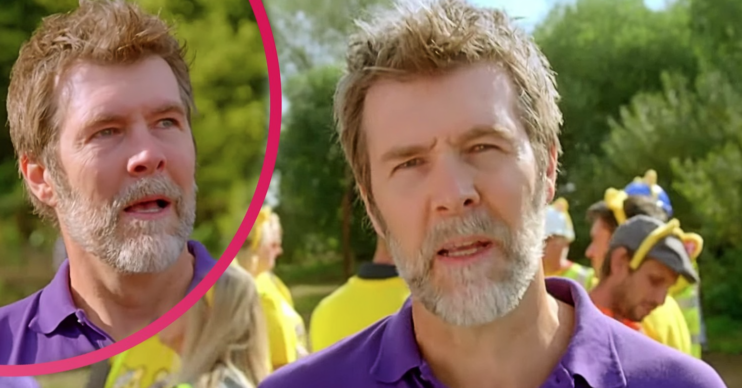 It was a big thumbs up from viewers

The comedian stood in for Nick Knowles for the emotional Children In Need special, and viewers rushed to social media to give their verdict on the 53-year-old’s performance.

What happened on DIY SOS with Rhod last night?

Rhod and the team went to Hull in East Yorkshire to help St Michael’s Youth Project.

The charity, which is Children In Need-funded, had hit on hard times and needed help.

St Michael’s were desperate to offer disadvantaged kids camping and adventure breaks, and Rhod and the team helped to transform the venue into a campsite and bike park.

Read more: Who is DIY SOS star Rhod Gilbert, is he married and why does he have a potato tattoo?

And, as the final reveal shocked the owners, it made Rhod emotional and he gave a stirring speech.

Epic #diysos for #ChildreninNeed tonight. Hats off to all concerned and brilliantly presented by Rhod Gilbert. Bring your tissues!
DIY SOS, Children in Need Special 2021: https://t.co/O8sWbf7UBJ via @bbciplayer

What a lovely programme.Children In Need is always a much needed reality check.Rhod Gilbert is brilliant host.💙😀👍🏻 #diysos

How did viewers react to Rhod on DIY SOS?

Rhod’s heartfelt reaction to the project, his good humour throughout and his personality won viewers over.

One wrote on Twitter: “Epic #diysos for #ChildreninNeed tonight. Hats off to all concerned and brilliantly presented by Rhod Gilbert. Bring your tissues!”

Another said: “Well done to all involved @DIYSOS ‘The Big Build’ #ChildreninNeed.

A third gushed: “What a lovely programme. Children In Need is always a much needed reality check. Rhod Gilbert is [a] brilliant host.”

What did Nick say about Rhod as host and why wasn’t he there?

Rhod was standing in for Nick Knowles, who had to sit the special out because of a spot of bother the regular host got into with the BBC.

Earlier this year, Nick starred in a Shreddies ad that sailed a bit too close to the DIY SOS wind.

And while the ad is still in circulation, Nick had to step back. He will return to the show next year.

However, Nick magnanimously sent Rhod a message yesterday before his debut on the show.

He said that he was sure Rhod would do a “sterling job”.