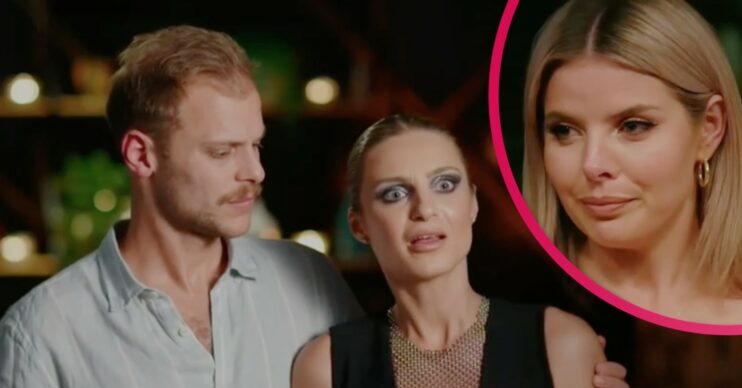 Seriously awkward conversation! And some disappointing behaviour from pretty much every other castmate.

During tonight’s episode, it’s revealed a member of the cast discovered and shared a naked photo of Domenica behind her back.

*** WARNING – SPOILERS FOR THURSDAY’S EPISODE AHEAD ***

The image causes quite a stir and results in Domenica – stunned into very uncharacteristic silence – leaving the scene with her husband Jack.

Here’s ALL the dirt.

What is the Married At First Sight Australia photo scandal?

Things take a turn on Married At First Sight Australia when a photo is shared across the cast’s Whatsapp group and brought up at a dinner party.

The image is a naked photo of Domenica that she posted on her Twitter to promote her OnlyFans account.

Read more: The Split fans rage at the BBC for infuriating end of episode one

Once the news breaks, Dom is devastated to learn that her friends have seen a naked pic of her and broke down into tears.

After a tense line of questioning from Dom’s husband Jack, Olivia finally reveals that she is the one who uncovered Dom’s OnlyFans account.

Olivia explains that she asked her friends to “dig up dirt” on Domenica which is how the photo came into light.

She says: “I’ll be honest, when we had our ‘thing’, my friends Googled you and they showed me that.”

How does the MAFSA cast react?

During the group dinner party, Cody reveals to Domenica that a naked photo of her has spread around the group.

He tells her: “I hate to bring it up, but we’ve all seen a photo of you naked.

“Does Jack know that you had an OnlyFans account?”

Read more: Deadline on Channel 5- Who’s in the cast, how many episodes and where is it filmed?

Several other members of the group also share that they’ve seen the snap with Domenica saying it felt like a “malicious attack”.

Dom’s friend Ella stands up for her and explains: “If it was me and I found out I would’ve let Dom know before tonight.”

However, Tamara chimed in and said: “I’m sorry but you put it out there. People are going to talk about it.”

Why did Olivia do it?

After sharing the photo of Domenica around, Olivia explains that it’s Dom’s fault for putting the photo out there on the internet in the first place.

Olivia scathingly tells the camera: “I have no idea who’s seen it in the group.

“I just sent the photos through. So my bad, but also I don’t really care enough to overthink it.”

She also tells the rest of the group: “She did it to herself, she dug that hole herself.”

What do Olivia and Domenica say?

Talking about the incident, Olivia shares that she feels no empathy for Domenica.

However, Domenica is heartbroken by what happened.

She tells Olivia: “I put it out on the internet. I’ll wear it. What I can’t accept is you [saying] sending it was not out of malice.”

Before storming off, she then rages: “I have nothing else to say to these people. I’m done.”

Since the incident, Domenica’s photo has been removed from the internet.

Domenica has also shut down her OnlyFans account after her site was leaked.