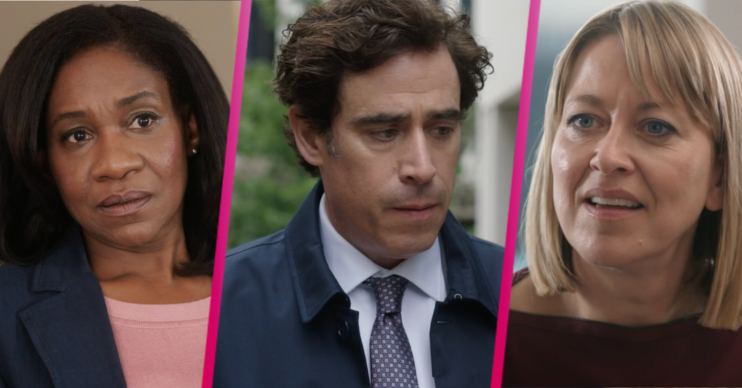 We were still reeling from James' death!

The BBC came under fire from fans of The Split last night (April 4) after giving away a huge spoiler at the end of the first episode.

The first episode of the third and final series went out last night, and it saw Lenny wanting to end her seemingly perfect marriage.

Everyone was surprised – Hannah, Nathan, Lenny’s brother Zander and her loving husband Felix.

Towards the end of the episode we saw Lenny take a cocktail of tablets.

But what’s wrong? Well, viewers appear to have figured it out thanks to a bit of a spoiler by the BBC as the end credits rolled.

As the credits rolled at the end of the first episode, viewers took to Twitter to bemoan what they saw as a huge spoiler.

As they came to terms with James’ shock death, they were hit with what appeared to be a major spoiler from the BBC’s continuity announcer.

The BBC offered fans affected by the stories in the show an action line, which led them to believe a motor neurone disease diagnosis is behind Lenny’s desire for a divorce.

Fans react to The Split spoiler

Fans were unimpressed with the apparent spoiler.

One said: “Spoiler alert at the end of #TheSplit would have been helpful @BBCOne.”

Another said: “Utterly baffled. The biggest unannounced spoiler after the brilliant #TheSplit. What was that all about @BBC?!”

Utterly baffled. The biggest unannounced spoiler after the brilliant The Split.

“There was just one very brief, subtle hint in one scene in #TheSplit, but nothing to justify the #bbc giving away such a major spoiler at the end. Huge mistake, shame on them,” said another.

“Absolutely balling at the last 10 mins #thesplit. Also naughty #bbc giving away a spoiler with their helpline at the end! At least check the episode contains that revelation first!” said another.

“Good to see #TheSplit back on @BBCOne last night,” said another. “Pity the continuity gave away a plot spoiler during the closing titles!”

Read more: Dermot O’Leary ‘very excited’ to bag a role in The Split

“#theSplit credits were followed with a helpline offer for those affected by motor neurone disease. Next week it will be followed by ‘if you were affected by spoilers last week,'” another mocked.

“Thanks BBC for the spoiler at the end – so we now know Lenny has MND,” another declared.

However, not everyone thought it was a bad thing, and praised the BBC for its plans to raise awareness of the disease.

“@BBCOne motor neuron disease #MND is trending due to your spoiler at the end of #TheSplit. Thank you for raising awareness of this horrific condition! It will be interesting to see where it goes,” said one.

ED! has contacted the BBC for a comment on this story.

What is MND or motor neurone disease?

MND is an uncommon condition that affects the brain and nerves.

It causes weakness that gets worse over time, with some sufferers getting “locked in” their body.

There’s no cure for MND, but there are treatments to help reduce the impact it has on a person’s daily life.

Some people live with the condition for many years.

The Split is on Mondays at 9pm on BBC One or binge the lot on iPlayer now.

Head to our Facebook page @EntertainmentDailyFix and tell us if you’re watching The Split.