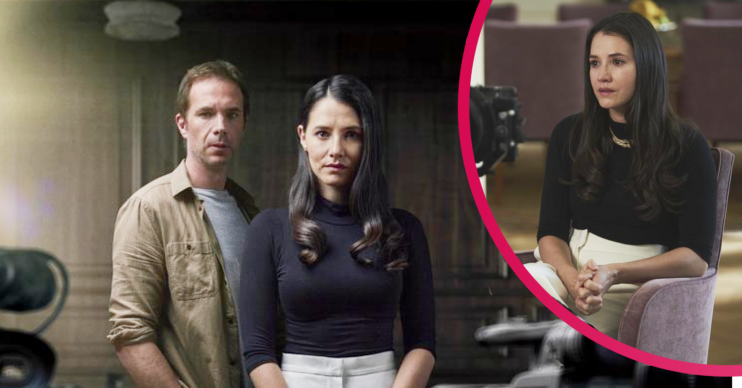 Deadline on Channel 5: Who is in the cast, how many episodes and where is it filmed?

Deadline – Channel 5’s new ‘thriller noir’ – starts tonight (Tuesday, April 5) and has all the components of an excellent drama, including a stellar cast.

It’s got the disillusioned male lead who has his head turned by a femme fatale.

And there’s a whodunnit right at the centre of it all.

Sounds good, right? Here’s everything we know about Deadline.

What is Deadline on Channel 5 about?

Deadline is about a disgraced investigative journalist, James Alden, who becomes obsessed with a woman he is profiling.

The woman happens to be Natalie Varga, who is on trial for murdering her husband.

James interviews Natalie for a documentary he’s making but finds himself falling for her.

Read more: Who’s in the cast of Coronation Street? Meet the full line-up

James’ infatuation with his subject leads to problems as the waters around his documentary are muddied by his feelings.

Meanwhile, the court of public opinion has already branded Natalie a killer, so will James get to the truth?

James made a terrible mistake in his past and episode one finds him working at a trashy TV company when he lands the scoop of the decade.

How many episodes of Deadline are there?

Channel 5 has really stepped up with its drama output in 2022.

So far we’ve had The Teacher with Sheridan Smith and Jill Halfpenny in The Holiday.

Like these two, Deadline has four episodes which will air over consecutive nights on Channel 5.

Where was Channel 5 drama Deadline filmed?

The drama was filmed between the UK and Budapest.

Cast member Indra Ové, who plays Barbara, said of filming abroad: “To shoot away from home in a foreign city, I actually find incredibly helpful. We’re away from home, so I quite like the intensity of that, and the lack of distraction.

“At home, you come home from work, you become mother, sister, wife, all those roles, immediately, as soon as you step through your front door. What’s lovely about this is we’re all immersed in the script, we’ve all come away for the script.

“That’s the whole purpose of being here. You live and breathe that world. And being in a lovely city like Budapest, it was a very easy city to work in, and the people were lovely.”

Viewers will recognise James from series 2 of Broadchurch in which he played murder suspect Lee Ashworth.

He’s also had leading roles in Agent Carter and Homeland. James played the Duke of Milan in last year’s Leonardo, about the life of Leonardo Di Vinci.

James has also had some big screen hits and was in Avengers: End Game and Dunkirk.

Talking about his role as a washed-up journalist in Deadline, James said: “I definitely think James is very human. I was sent the script, and immediately was struck by this flawed character who had, as it turned out, made a colossal mistake.

“You didn’t know why, but what I really liked about him was he seemed fairly cheerful about the fact that he’d floated downwards, and he didn’t seem to even really have massive aspirations to dig himself out of that hole.”

James (the character) is making a documentary about suspected murderer Natalie when she offers him the chance to interview her. But it comes with a condition – he has to find out who really killed her husband.

But does James believe that Natalie is innocent?

James (the actor) admitted: “When James first meets Natalie, there’s no doubt that he thinks she did it. He says a couple of times that the entire world thinks she’s guilty.”

Will she convince him of her innocence?

Charlie is an Irish actress who you’ll recognise as Ann Gallagher in Happy Valley.

She was nominated for an Irish Film and Television Award (IFTA) for her Happy Valley role in 2017. The nomination was for Best Actress in a Supporting Role. She won the award.

She also starred in another massive hit, Peaky Blinders. Charlie played Jessie Eden in the show. She won the Best Actress in a Supporting Role IFTA again for this part in 2018.

Speaking about her role as murder suspect, Natalie, Charlie said: “I had never played a character like Natalie before. She’s such a Pandora’s box, and there’s so much to discover.”

Charlie also spoke about her own fascination with true crime and how the media becomes so involved in high-profile cases.

She added: “I think my fascination comes from how the media treats a potential victim or a potential perpetrator, and how the general public can mess up a case or interfere with the case. This trial by media… innocent until proven guilty is far in the background these days.”

Natalie is being held for killing her husband, but she says she didn’t do it. It soon turns out that Natalie is much more vulnerable than she appears after a difficult childhood.

Barbara is a long-term friend of James and they also have a bit of a romantic past. Ohh la la.

Will Barbara feel sidelined as James grows closer to Natalie? She seems to be one of the only people willing to give James a second chance after the mistake he made in his journalistic career. But will her affection for him run out as he continues to act recklessly.

Indra said about Barbara’s relationship with James: “When you meet them at the beginning of this series, Barbara is giving him a second chance. I think she’s got a real soft spot for James.”

Indra is a well-known face on British TV. She’s most recently been seen playing Anna in Netflix hit Sex Education.

She’s also had roles in Breeders – alongside Martin Freeman – and Unforgotten. Indra’s also done the Holby City and Casualty rounds, having starred in both dramas several times in different roles.

Anamaria is best known for her role in Channel 4 film Sex Traffic, which earned her a BAFTA for Best Actress in 2005.

She’s appeared in other British TV dramas like Holby City, River, Hotel Babylon and The Missing.

Toth is billed as a sinister henchman who James Alden unwittingly attracts the attention of while he’s trying to find the killer of Natalie’s husband.

He warns James off, but James doesn’t listen. How far is Toth prepared to go to keep James away from the truth?

Brian Capse will be a familiar face for film buffs. He’s starred in movies such as Jojo Rabbit and Mission Imposible: Ghost Protocol.

We don’t want to give too much away about who Oliver is or what part he plays in the story, but it will definitely be a surprise for viewers.

Oliver is played by actor Ian Bonar, who starred in Skyfall in 2012.

More recently he’s been seen in Vera and 2020’s huge hit I May Destroy You.

Not much is known about Vera apart from the fact she’s a former lover of Natalie and gave her an alibi for the night of her husband’s murder.

Nina won’t be familiar to British audiences as most of her career has been in other countries. But she’s worked with stars like Charlie Hunnam and Alec Baldwin.

Deadline starts tonight (April 5) on Channel 5 at 9pm and continues for the next three nights.