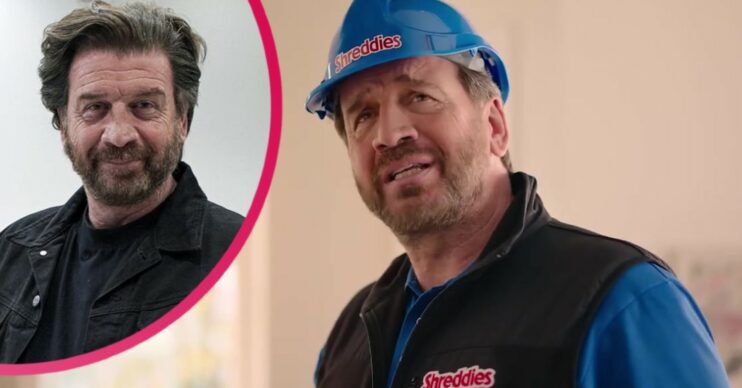 Is Nick Knowles not doing DIY SOS now? What’s his new show – and what happened with his Shreddies ad?

The telly fave is back with a new show

DIY SOS star Nick Knowles is one of the UK’s best-known TV heartthrobs and he’s back with a new show.

However, Nick’s career nearly hit a bit of a bumper this year over a Shreddies advertising campaign.

So what actually happened?

Who is Nick Knowles and how tall is he?

He has a brother, John, and three sisters, Angela, Sheila and Karen.

When he was 11 his family moved to Mildenhall, Suffolk, before moving again to Kent where he attended The Skinners’ School.

He’s best known for the BBC series DIY SOS where he lends a helping hand to very worthy makeovers.

Nick also presents shows including Who Dares Wins and Close Calls: On Camera.

He released his debut album, Every Kind Of People, in 2017.

What is Nick Knowles’ net worth?

The TV presenter is believed to be worth a whopping £7.5m.

What happened with the Shreddies advert?

Nick sparked trouble when he featured in a 30-second Shreddies advert as a builder helping a family while describing himself as “Nick ‘get it done’ Knowles”.

BBC guidelines ban employees from carrying out promotional work which “mimics or replicates” their on-air roles for the broadcaster.

The issue was sorted out behind closed doors with the corporation.

Will he be back on DIY SOS?

Due to time conflicts, Nick was forced to step down temporarily and will miss the Children In Need charity special later this year.

He will resume filming in the coming months and be back on screens in 2022 for series 32 of DIY SOS.

Nick said in a statement: “I have always said that DIY SOS is more than just a presenting job for me, it’s part of me, it has my heart and working for the BBC for over 22 years is something I have never taken for granted.

“The DIY SOS Children In Need special will air in November with a guest presenter and I will be cheering them on from the sidelines.”

He added: “I urge you all to focus on the build which will ensure the children get much-needed help, not about who is presenting the show.

“I will film new episodes of DIY SOS over the coming months. I’ll be back on your screens with the purple shirts next year.”

Will you be watching Nick when he returns? Head to our Facebook Page @EntertainmentDailyFix and leave a comment!