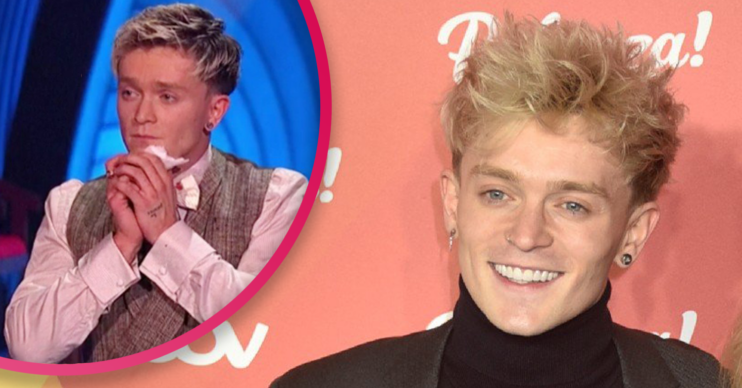 Who is Dancing On Ice star Connor Ball dating? Where is he from?

He's already had a horror injury on the ice!

Dancing On Ice star Connor Ball has been in the wars on the ITV show.

Last weekend on Dancing on Ice, The Vamps star suffered a horror fall ahead of the live show.

As a result, this meant his episode-opening performance had to be pushed back till later in the show.

After he did skate, however, Connor was seen with blood pouring from his face.

What happened to Connor last week on Dancing On Ice?

As a result, Connor was then shown holding a tissue on his chin as he attempted to contain the blood.

He explained: “I was a bit stressed about the spin. I kept trying to perfect the spin. I just slipped down and smacked my face.”

Where is Dancing On Ice star Connor Ball from?

Connor is the bassist for the popular British boy band The Vamps.

The band got together in 2012 and since then they’ve had two number one albums.

Their most recent album, entitled Cherry Blossom, was released in 2020.

Connor is 25 years old and hails from Aberdeen in Scotland.

How tall is Connor Ball?

Connor stands at 5ft 7in tall.

So if you work in metres and centimetres, that translates to 170cm!

Why did Connor join Dancing On Ice?

Even though he hasn’t watched much of the show before, Connor said he was excited to be joining the line up.

When asked why he wanted to compete, he revealed: “It’s the challenge but it also looks super fun. I’d like to see how far I’d get.”

The bassist even admitted he was ready to take on the sequins and fake tan.

According to Connor, the “more sequins the better”.

Who is Connor Ball dating? Is he single?

Connor is currently dating 25-year-old Lucy Moore, who “works in telly” according to her Instagram.

They pair have been dating for three years, after Connor split from Instagram model Luisa Hackney.

However, he was also rumoured to date Little Mix star Jade Thirwall back in 2015.

Connor opened up about his anxiety and “fear of touring” on This Morning in 2018.

Opening up about the often hidden health battle, he confessed: “I suffer generalised anxiety disorder, panic attacks and depression as well.

“In the band it has affected me because I don’t go to as many things as I would like to or should do.”

Connor sat down with therapists on the show and shared his experiences with anxiety.

He even revealed a heartbreaking story where he suffered a panic attack and was rushed to hospital.

He said: “It was like a wave hit me. I had no idea what was going on. I couldn’t breathe.”

Connor has admitted he might get a little “stage fright” on Dancing On Ice, but he’s proving to be pretty nifty on a pair of skates so far this series!

So who are you backing to win? Head to our Facebook page @EntertainmentDailyFix and let us know.