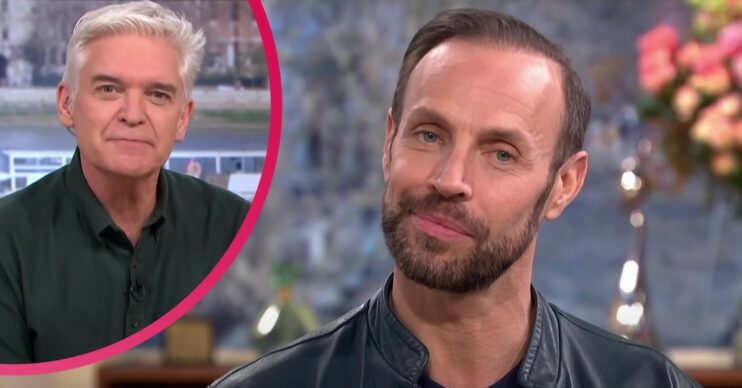 There's no love lost between the former colleagues

Former Dancing On Ice judge Jason Gardiner has taken to Twitter to make a brutal dig at host Phillip Schofield.

Dancing On Ice: What did Jason say about Phillip Schofield?

Jason captioned the post: “Well done @StephenMulhern You are brilliant on any show you present because you are naturally funny and supremely talented.

“#scofe must be shutting himself! Dancing On Ice fans slam ‘smug’ Phillip and want Stephen Mulhern every week (sic).”

We think he meant something a bit ruder than “shutting”, by the way. Good old autocorrect.

Who replaced Phillip Schofield on Dancing On Ice?

Phil, who also presents This Morning with Holly, tested positive for COVID on February 1st.

He’s missed This Morning ever since, seeing the likes of Alison Hammond and Vernon Kay step into his shoes.

New government COVID rules mean a person only has to isolate for five full days if they can provide a negative test on  Day 6.

What did Jason quit Dancing On Ice?

Jason quit following accusations he “bullied” Gemma Collins during her 2019 stint in the show.

Rumours began circulating that ITV were looking to replace Jason and it’s rumoured he jumped before he was pushed.

He made the announcement on Instagram, posting a live video.

Jason said: “After all these years I feel it’s time for me to say goodbye to my judging role and return to things I have been putting on hold and have been on the back burner for a while.

There’s no love between Phil and Jason, despite working alongside each other for several years on DOI.

Following his departure, Jason hit out at Phil and Holly, branding them “fake” and accusing them of “snubbing” him.

He told The Sun back in 2020: “Since it was announced I was leaving the show I’ve had nothing from Phil and Holly. Not even a text message.

“It is hurtful, especially because when Phillip was getting a lot of negative attention recently I sent him a message of support.

“I thought they would get in touch but I’ve learned this industry is full of fake and disingenuous people.”

He also claimed to the publication that he’d had “numerous” run-ins with Phil in the past, but they’d been nipped in the bud.

Does Phil need to watch out??