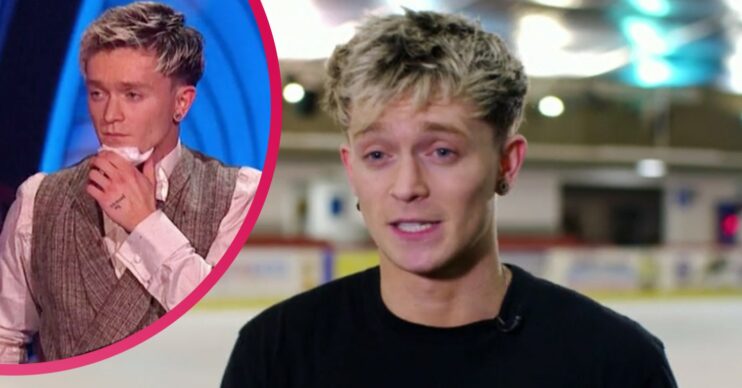 Dancing On Ice viewers were left concerned last night after Connor Ball injured himself before the show.

The Vamps star and partner Alexandra Shauman were due to open the show with a Charleston-inspired routine on Sunday evening (February 6).

However, Connor’s performance was pushed back after suffering from a horror fall.

Stephen Mulhern addressed Connor’s injury after he eventually took to the ice.

The host, who replaced Phillip Schofield on the show, shared: “I don’t know if you can see this but Dancing On Ice is completely live and Connor was meant to open the entire show.

I smacked my face

Speaking to the singer, he said: “Mate – first of all, I don’t know how you still performed. What happened backstage?”

Connor was then shown holding a tissue on his chin as he attempted to contain the blood.

The 25-year-old explained: “I was a bit stressed about the spin. I kept trying to perfect the spin. I just slipped down and smacked my face.”

Stephen added: “We’ll get it seen to. I know the paramedics are on stand-by. It’s dripping on your shirt. Well done mate.”

Despite the emergency, Connor waited for the judges to give their comments before being treated by medics.

However, fans of the show were concerned over Connor not receiving medical attention immediately.

How did Dancing On Ice fans respond?

Taking to Twitter, one shared: “God Connor standing there bleeding made me feel so terrible for him. We didn’t need to have his post scoring interview, let him go get his stitches #DancingOnIce.”

A second shared: “They couldn’t have hurried up with their comments??? Why did they make Connor stand there that long clearly in pain and bleeding everywhere while they rambled on!!”

A third wrote: “Am I the only one that thinks Connor should have been allowed to get treatment instead of letting him bleed. Fantastic dance from Connor & @AlexandraLukasz. Know the judges comments are important but getting the bleeding stopped also important.”

Connor was bleeding and had a tissue over his face, but they still made him stand there to hear his feedback 😅 #DancingOnIce pic.twitter.com/63n7GY1tlr

#DancingOnIce Am I the only one that thinks Connor should have been allowed to get treatment instead of letting him bleed. Fantastic dance from Connor & @AlexandraLukasz . Know the judges comments are important but getting the bleeding stopped also important.

Another concerned fan said: “Connor was bleeding and had a tissue over his face, but they still made him stand there to hear his feedback.”

In addition, a fifth posted: “I think they should have let Connor go and see the paramedics rather than hear the judges comments… just a tad uncomfortable to watch #DancingOnIce.”

A Dancing On Ice spokesperson told ED!: “Connor sustained an injury shortly before his live performance and was treated by the Dancing on Ice medical professionals. Health and safety of our cast and crew is of the utmost importance.”

What did Connor say?

Shortly after the show, Connor took to social media to reassure fans over his injury.

Alongside a video on Instagram, he posted: “Well, that was an interesting night… smashed my face off the ice then scored our highest score so far of the show!

“But honestly thank you so much to everyone that jumped in to help so quickly, everyone on the show is bloody awesome and I’m lucky to be surrounded by great people. PS. the last photo is the shirt i SHOULD’VE worn before it got covered in blood.”