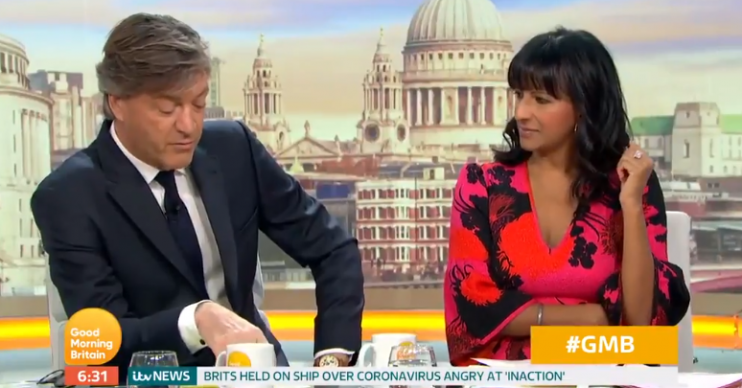 The presenter died at her London flat this weekend

The Love Island presenter was found dead at her London flat on February 15 after tragically taking her own life at the age of 40.

On Monday’s show, Richard Madeley, Ranvir Singh and Richard Arnold took a moment to discuss Caroline and her “extraordinary energy”.

Richard said: “It’s very hard to stop thinking about Caroline Flack, isn’t it? It’s constantly bubbling in the top of the mind, going over and over and over.”

Ranvir continued: “I think it’s one of those things, for anybody watching this morning who, if not for 10 minutes, if not for half an hour, or whether it’s the whole weekend, you literally felt your heart actually sink.

“I didn’t know Caroline, she’s part of the ITV family. She was on these lovely heartwarming, happy programmes. She was kind of the whole narrative ‘good times.'”

Showbiz correspondent Richard admitted he was in “total disbelief” over the news.

He said: “I was in total disbelief when I got the message and my jaw just hit the floor. I couldn’t quite believe it.

“This is obviously a woman who clearly had her issues which she spoken very frankly about and is very well-documented.

‘Caroline, when you were in her orbit, she didn’t just fizzle – she absolutely fizzed.’

“When you were in her orbit, she didn’t just sizzle, she absolutely fizzed. She had this extraordinary energy and this X factor that was so at odds obviously with the torment she had.”

Tributes have poured in on social media following the news of Caroline’s death.

I was in total disbelief when I got the message and my jaw just hit the floor.

News of Caroline’s death broke Saturday evening, with a spokesperson for her family releasing a statement shortly afterwards.

Caroline’s boyfriend Lewis said his “heart is broken”, adding on Instagram: “I am so lost for words, I am in so much pain I miss you so much, I know you felt safe with me, you always said ‘I don’t think about anything else when I am with you.’