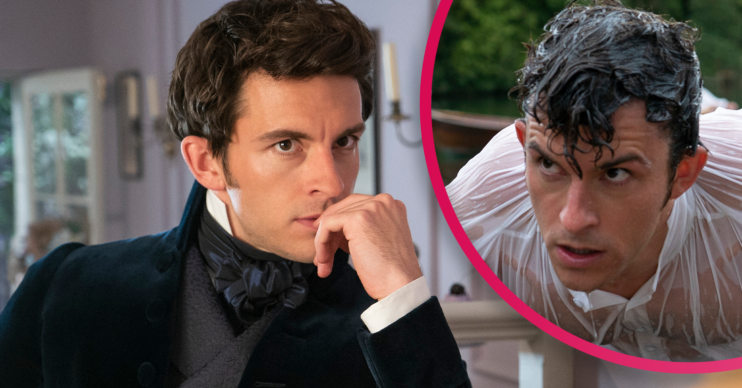 Bridgerton star Jonathan Bailey has got fans of the Netflix series all hot under the collar with the release of a new still from upcoming season 2.

The new series of the Netflix period drama airs on March 25 and, if you can’t wait till then for a glimpse at the new leading man, then read on.

And prepare to drool!

And, from the looks of a new picture that’s just been released, he shouldn’t have any issues finding a wife.

Read more: Queen Charlotte gets her own spin-off show – everything we know here!

In fact, if we were in the period drama we would be falling at his soaking wet feet.

In the new picture, Anthony is seen emerging from a lake clad in a see-through skin-tight white shirt.

And fans of the series have said that he doesn’t look unlike a certain Mr Darcy – played by Colin Firth in the movie Pride and Prejudice.

How did Bridgerton fans react?

With glee, it has to be said.

“MR DARCY WHO???? I ONLY KNOW VISCOUNT BRIDGERTON!” declared one avid fan on Twitter.

Another commented: “Oh my damnnnnn,” with lots of love heart eye emojis.

“OMG WET ANTHONY A LA WET MR DARCY??? The Serpentine scene will END me!” declared another.

What will happen in Bridgerton series 2?

The second series of the hit Netflix show drops later this month.

It’ll follow Anthony Bridgerton’s quest to find a wife, following on from sister Daphne’s love story in series one.

He sets his sights on Edwina Sharma.

However, it’s her overprotective sister Kate that the eldest of the Bridgerton gang soon starts to fall for.

The second Bridgerton book, which the series is based on, gives a teaser of what’s to come.

It reads: “Kate is determined to protect her sister – but she fears her own heart is vulnerable.

“And when Anthony’s lips touch hers, she’s suddenly afraid she might not be able to resist the reprehensible rake herself.”

Will you be tuning in? Tell us on our Facebook page EntertainmentDailyFix.