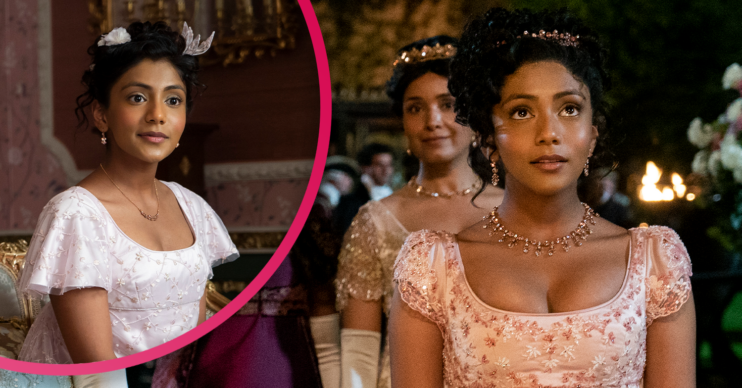 Trouble ahead for Bridgerton's newest family?

Charithra Chandran, who you may have seen in Alex Rider, plays Edwina – a young, naive debutant looking for her perfect match.

Sister Kate is on hand to help her… Or is she?

Read on for all we know – and expect Bridgerton season 2 spoilers!

Bridgerton season 2: Who is Edwina Sharma?

Edwina Sharma has been taught by elder sister Kate to be the perfect debutant.

Kind-natured and endearing, she’s young and naive but knows what she wants – and that’s a true love match.

She first captures Anthony Bridgerton‘s eye, but sister Kate starts to meddle when she discovers Anthony isn’t in it for love.

Kate decides that he doesn’t deserve to marry her sister, but Anthony endeavours to win her over in an attempt to made Edwina his wife.

However, Kate gets more than she bargains for when she starts to fall for Anthony – and he feels the same.

So where does that leave the sisters as they’re pitted against each other for his hand in marriage?

Well… The pair share a scandalous kiss and they’re forced to marry as a result.

But how will it all work out? Fans of the book will know, but we won’t spoil that part for you!

Why has Charithra said about the role?

She told The Face her character goes on the “biggest journey” of all the characters in the show.

“She’s a kind and warm young girl that you get to see become a woman.

Read more: What’s next for Benedict Bridgerton in Bridgerton season 2?
“>I felt a real responsibility because a lot of girls are in her position – bred to marry, whose existence is shaped in relation to a man.

“Edwina shows that you can take control of your life and be so much more than what people expect of you. I hope she resonates and connects with people, so that they can see themselves in her.”