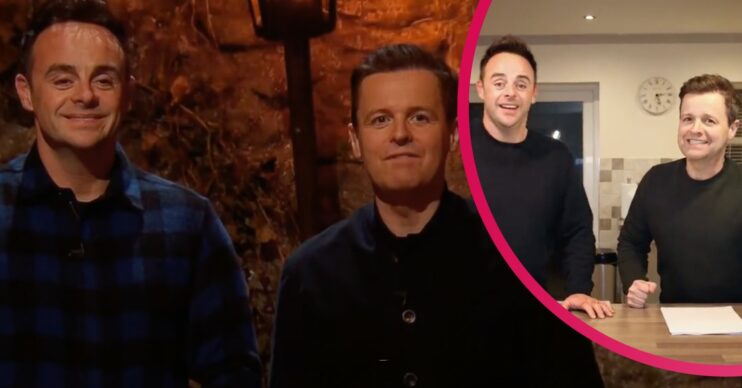 Ant and Dec provided a silver lining to all the I’m A Celebrity chaos, declare fans

They've been the only good thing about the show in the last few days!

Fans have been loving Ant and Dec’s I’m A Celebrity updates over the last few days, despite all the negative news surrounding the show.

I’m A Celebrity was off the air on Saturday and Sunday (November 27 & 28), and won’t be airing tonight (Monday, November 29) either.

Why was I’m A Celebrity off air over the weekend?

Storm Arwen has caused chaos at Gwyrch Castle in North Wales over the last few days.

On Friday (November 26), Ant and Dec were forced to pre-record their segments of the show. This was because bosses were concerned that Storm Arwen would affect signals if they tried to broadcast live from the castle.

The tempestuous storm caused even further disruption over the weekend too, so much so that the celebrities had to be evacuated from the castle.

The show was then cancelled on Saturday and Sunday and was replaced by a clip show consisting of some of I’m A Celebrity’s best bits instead.

Fan reactions to the continued issues plaguing the show have been mixed, to say the least. Some fans are waiting patiently for the storm to pass, others are angry and disappointed that the show is off-air, and some have even called for this season to be cancelled.

What did Ant and Dec have to say?

📢 More news from the kitchen! The @imacelebrity team are working round the clock to get us back on your tellies ASAP!🤞Meanwhile we hope you’re enjoying a better meal than a crisp sandwich 🥪 pic.twitter.com/IhE3PgONgI

However, ITV has confirmed today that I’m A Celebrity will return on Tuesday (November 30) night. Ant and Dec will be presenting live from the castle too.

Prior to ITV’s news, I’m A Celebrity hosts Ant and Dec had taken it upon themselves to keep fans of the show in the loop with what was going on with the show.

Ant and Dec took to Instagram and Twitter yesterday (November 28) to provide fans with an update on the show. Talking about the damage the storm had caused, the stars said that the crew was working “round the clock” to get everything back up and working.

However, the pair admitted that they didn’t know when they’d be back on TV.

Despite being the bearers of bad news, fans of I’m A Celebrity have been loving the pair’s updates.

How have I’m A Celebrity fans reacted to the duo’s updates?

“You two could do an hour’s show talking from this kitchen and talk about nothing of any relevance and people would still watch,” one fan wrote. “I tip my imaginary hat to you gents!”

“You are doing a great job under terrible times God bless you both,” another viewer wrote.

“Missing you both being on telly,” a third fan of I’m A Celebrity said.

“These guys are my favourite duo,” another said.

With the show returning tomorrow night, ITV bosses will be hoping everything runs a bit more smoothly from now on.

Prior to the show’s suspension, GMB presenter Richard Madeley was forced to exit early due to illness. There was also a lot of uncertainty around whether Naughty Boy and Arlene Phillips were going to leave too.

What do you think of Ant and Dec’s I’m A Celebrity updates? Leave us a comment on our Facebook page @EntertainmentDailyFix and let us know.