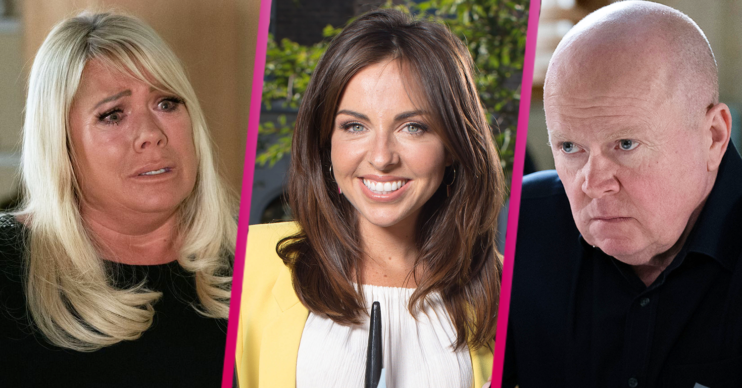 Who gets the Vic in Eastenders? Phil and Sharon could be set for a huge surprise

As Phil and Sharon go head-to-head, will an unexpected late entry win the race?

Sharon and Phil Mitchell have officially gone to war in EastEnders.

The Walford tough man is determined to punish his ex for not giving up her baby, Kayden.

And he plans to hit her where it hurts – the Queen Vic.

As Mick and Linda Carter plan to sell the pub and start a new chapter and it looks like they won’t be short of offers.

But who gets the Vic in Eastenders?

Who gets the Vic in Eastenders?

Presently, it looks like it’s just Sharon and Phil in the race.

However, fans on Twitter are convinced there may be a few late contenders.

Let’s take a look at who could possibly be

Phil is currently the favourite contender to get the Queen Vic.

He’s absolutely rolling in cash after robbing a warehouse in Stratford with Ben.

This was of course at the expense of his son’s hearing.

Now, Phil plans to use the money to pay for the pub.

But EastEnders is never that straightforward.

Poor Sharon couldn’t bring herself to choose between Phil and her baby boy.

Initially, she told Phil she would do anything to make their relationship work.

But after he vowed to buy the Vic and not let her step foot in it again, will she have a change of heart?

READ MORE: EastEnders fans convinced Sharon will take the Vic for herself and Kayden

Sharon’s not short of a few bob herself so could definitely afford it.

And she made not secret of the fact that she wants the pub after telling Phil “it’s my home!”

Judging by Twitter, fans want to see Sharon back in the Vic too.

“Sharon deserves the Vic on her own terms, she has more claim to it than Phil ever has, so she should be the one to buy it. #EastEnders,” wrote one.

Perhaps we should watch this space.

Some fans are rooting for Ben to get the Vic.

He is now completely deaf after helping his father to rob a warehouse in east London.

Given his huge sacrifice, should he get the money to buy the pub?

Ben and Callum have certainly proved popular with viewers.

Linda and Mick have put the Vic up for sale to help her beta alcoholism.

However, the couple plan to stay in Walford and don’t have anywhere else to live.

They also don’t appear too worried about how they’ll pay the bills in their new home.

Could this be because they don’t really plan to go through with the sale?

READ MORE: Stacey Dooley to host EastEnders: Secrets from the Square as soap goes off air

Some viewers certainly seem to think so.

“I wonder if the Carters sell? I get the feeling they won’t,” one viewer tweeted.

“Even if they move, Linda’s going to be tempted to drink, where ever she is.

“Knowing she’s in The Vic could be motivating her not to drink! if that makes sense? Since she’s surrounded with alcohol!! #EastEnders.”

Some EastEnders fans are convinced Ruby will be the owner of the Vic.

“I wonder what will be the cliffhanger before the hiatus,” one fan tweeted.

“And I wonder if the writers will do a “three months later” when the show returns. My bet is that during this gap, Ruby, not Phil, buys The Vic.”

The businesswoman probably has more cash put away than the other bidders combined.