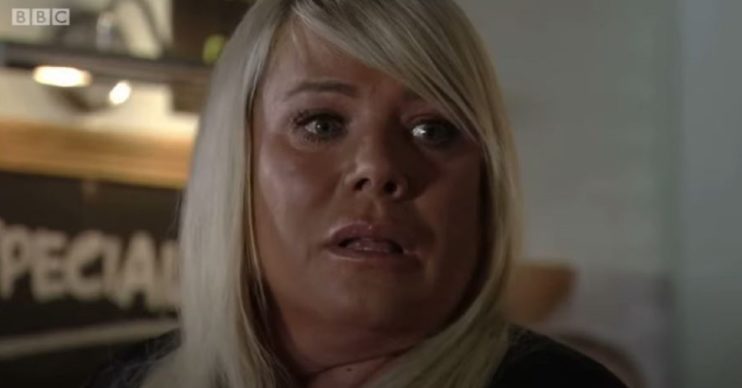 Fans think Sharon has some tricks left up her sleeves

Fans of EastEnders are convinced Sharon will be back in the Vic – without Phil!

Hard man Phil is determined to buy the pub so he and Sharon can run it together as a couple.

However, with Sharon having clear doubts about giving baby Kayden up for good, fans think she’s about to change her mind.

What are EastEnders fans saying about Sharon?

And they are convinced she will take the Vic for herself and her baby, leaving Phil out in the cold.

One said: “Sharon’s gotta be scheming. Half of time she doesn’t even wanna be in the same room as Phil.

“She’s lying to him about the teddy bear and going to Linda to help.

“I wouldn’t be surprised if it was just Sharon and Kayden living in the Vic. #EastEnders”

A second said: “I definitely think Sharon is double crossing Phil and is intending to take him for all he has got, in revenge.

“Don’t forget, Phil said she wasn’t getting anything, even her secret account he had, somehow, taken off her. He was prepared to leave her with nothing.”

A third said: “Can’t wait for Sharon to get her son back. Kayden watts needs his mum #EastEnders”

However – Sharon will have to be quick as Karen is preparing to leave with her grandson.

Will Karen leave Walford with Kayden?

Actress Lorraine Stanley said she didn’t think Karen could understand Sharon’s decision to give up Kayden.

She said: “I don’t think Karen can quite get her head around it because Karen is such a maternal mum, I just don’t think she’d even do that as a mother.

“In a way she’s doing a similar thing but her kids are grown up so it’s different.

“So I think she’s got mixed feelings really. She understands what Sharon’s going through but I don’t think it would be something she’d ever do herself.”

Lorraine added: “Obviously as a mother she doesn’t want to leave her children but she feels that she’s doing the right thing for Kayden. She couldn’t bare him to go into care. So it’s her only option.

“I think she’s really bonded with him, being that age as well, she has really strong feeling for her little grandson.”