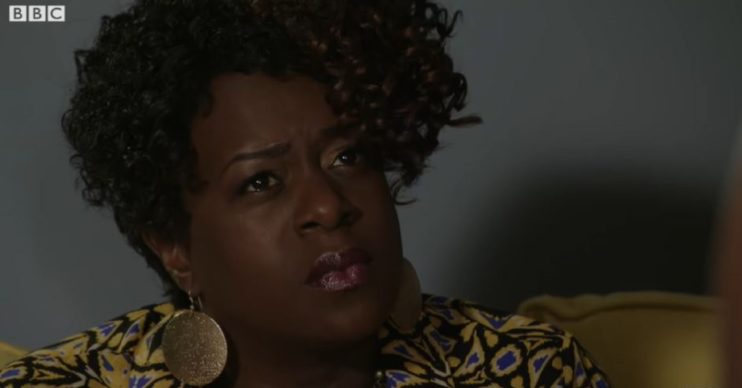 They really need Kim back to liven up the Square

Fans of EastEnders are desperate for Tameka Empson to return to the show as Kim Fox.

Kim last appeared on the soap at Christmas via a video call over lunch with her family.

The actress had said originally that she was returning “for a good while” to the soap, but that has yet to happen.

She said: “Kim has been working in Scotland as a tour guide. If anyone can do that, it’s Kim.

“But she’s coming back soon. And I’m hoping it will be a big storyline. With Kim Fox it’s got to be big. We can’t just have her turning up at the cafe.

“I don’t know what I’ll be doing. All I know is it will be a Christmas cracker.”

She also told The Daily Star at the time: “I’ve had fans saying they want to see Kim back on the show, which is really nice. It’s really lovely.

“What I love is that we have seen Kim grow. She’s not a one-trick pony. Initially she was the happy factor, which was great.

“But now she’s a mother and we’ve seen her manoeuvre through life. I’ll be back for a good while. I don’t want them to kick me out.”

And six months on, fans are desperate for Kim’s return to happen.

Fans are desperate for Kim’s comeback

With filming resuming at the end of June, viewers want Tameka back where she belongs.

Taking to fan forum Walford Web, one said: “I love Kim and Tameka so hope she is back soon. A great character played by a great actress. Just keep her away from Chantelle, that feud was quite tedious.”

A second said: “I’ve always liked Kim, I do miss here, and would like her to come back sooner or later.”

A third said: “I do miss Tameka/Kim a lot and hope they return at some point.

“Tameka/Kim for me are iconic and they have a screen presence, charisma and personality that just radiates on screen and I have missed that sheer energy Tameka/Kim bring to the proceedings.

“Tameka has shown she can do both Drama and Comedy and I think is underrated.”

Do you want Kim back? Leave us a comment on our Facebook page @EntertainmentDailyFix and let us know what you think!