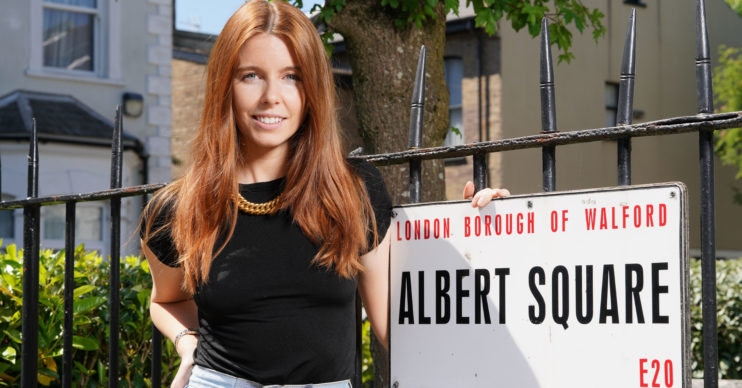 Stacey Dooley to host EastEnders: Secrets from the Square as soap goes off air

The BBC soap will be going off air

It has been announced that Stacey Dooley will be hosting a new show called EastEnders: Secrets from the Square when the soap goes off air.

Back in March, EastEnders halted production and reduced episodes due to the coronavirus pandemic.

As episodes are beginning to run out, it has been revealed that EastEnders fans will still be able to get their fix.

EastEnders: Secrets from the Square

On Monday nights, viewers will get a unique look behind the curtains of the BBC soap. They will be able to gain insight from the cast on what it’s like to play their iconic characters.

The new series will be hosted by Stacey as she sits down in Walford East each week with two different cast members. The actors will be able to reflect on their time on the show and tease what’s to come.

We may also see the occasional sneak peek behind the scenes.

They will be looking back at their first memories of the show, as well as the juiciest dramas to hit Walford and stories from behind the scenes.

EastEnders: Secrets from the Square will premiere, Monday, June 22 at 8pm.

What will happen on Tuesday nights?

On Tuesday nights, viewers will get a chance to reminisce and relive some of the unforgettable moments from the show.

EastEnders has been the heart of BBC One since it’s inception 35 years ago.

A selection of iconic episodes will be re-shown. These include Den and Angie’s two-hander, Sharongate and the explosive reveal of Max and Stacey’s affair.

Speaking about hosting the new show, Stacey said: “I’m delighted to be hosting Secrets from the Square. I grew up watching EastEnders, so walking on Albert Square was a surreal experience as well as taking a trip down memory lane and interviewing some of the legends has been great. I’ve loved every minute of it.”

Read More: EastEnders viewers overjoyed as Sharon wants to take back Kayden – but what does this mean for her and Phil?

Katie Phillips, Controller of BBC Entertainment said: “EastEnders has been the heart of BBC One since it’s inception 35 years ago.

She continued: “While going off air was never in their plan, we and the EastEnders team knew straight away that this would be the perfect opportunity to celebrate the show, look back on cherished memories of all those momentous episodes whilst taking a look around Albert Square and they may just give us some teasers of what’s to come in the show.”