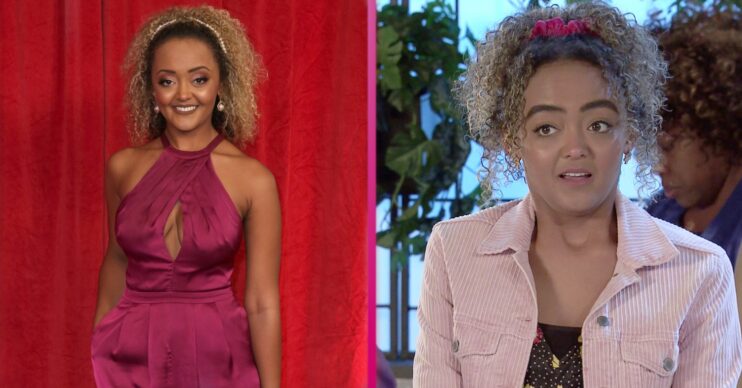 Coronation Street fave Emma Brooker is happily engaged to boyfriend Curtis – and in a case of life imitating art, actress Alexandra Mardell who plays her is also getting hitched!

Emma’s definitely had her ups and downs when it comes to love. And whether she’s really found it with Curtis remains to be seen as some fans think he’s conning her!

But thankfully, things are far more straight forward for Alexandra. She’s been loved-up for quite a while.

Here’s the low-down on her life on the cobbles and off it.

Emma arrived on the cobbles to work as an apprentice hairdresser at Audrey’s salon and new love interest for David.

David dumped Emma as he was just using her to feel masculine following his rape. She quickly moved on to Seb Franklin, although that also ended in heartbreak for Emma.

Who are Emma’s parents in Coronation Street?

A year after her arrival, it was revealed that Emma had a huge connection to the cobbles – her biological father, Steve McDonald, lived there.

However, Emma had no idea the man who brought her up, John, wasn’t her real dad, so it was a shock to both her and Steve when they discovered they were related.

Emma’s mum is former Corrie hairdresser Fiona Middleton, who it was revealed was pregnant with Steve’s baby when she left the show in 1998. She then gave birth to Emma in 1999, but never told Steve about her.

Who is Emma engaged to?

After not having much luck in love, Emma met Curtis Delamere earlier this year and was instantly smitten.

It took a while for Curtis to win Steve over though as they’d had a previous altercation during a bike race.

And matters weren’t helped when Steve spotted Curtis with a mystery woman and assumed he was cheating.

The truth was far more devastating: Curtis has a terminal heart condition that can’t be diagnosed. The girl he was with was from his support group.

Curtis eventually confessed the truth to Emma, who is desperate to help him see a specialist and get a prognosis for his lifespan. She’s even asked Steve to lend them some cash from Oliver’s charity fund to pay for it. However, Steve had to refuse her request.

But tonight (Friday, November 4) sees Steve offer his and Tracy’s savings to pay for the care Curtis needs.

With Emma and Curtis happily planning their wedding and now the news Curtis could get the medical attention to save his life, the future might just be looking at little more bright for the couple…

The couple, who have been together for four years, moved in together at the beginning of 2020.

Lockdown saw their love blossom even stronger and Joe popped the question in April 2021.

She captioned the post: “Love locked down! 1000000 times yes! You make me so happy my face hurts. Love you ridiculously. Future Mrs Parker.”

Her friends and Corrie co-stars rushed to congratulate Alexandra and Joe.

You make me so happy my face hurts. Love you ridiculously. Future Mrs Parker.

When is Alexandra Mardell getting married?

Alexandra and Joe have not revealed any wedding plans, but last month Alexandra posted pictures to her Instagram Stories holding a wedding planner book outside Princess Occasions.

The company specialises in wedding styling and decor, so it’s fair to say the plans for the big day are in full swing.

But will Alexandra or Emma make it down the aisle first?