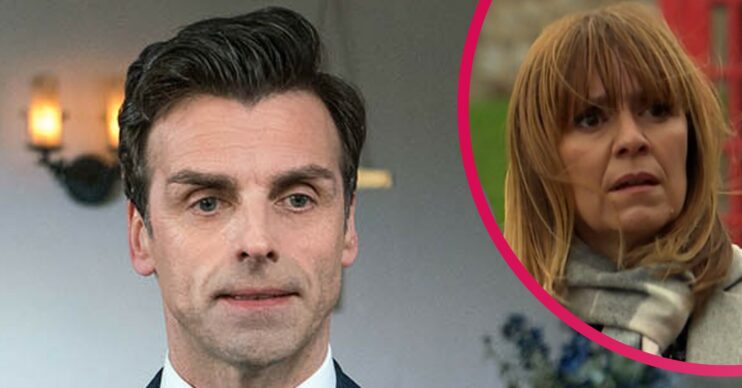 Will Emmerdale rapist Pierce Harris ever get out of prison for attacking Rhona?

He's behind bars - but for how long?

Pierce Harris seemed like a secondary character when he arrived in Emmerdale.

He was just the husband to Tess Harris – Paddy Kirk’s secret lover and little Leo’s teacher.

But soon Pierce was making his mark on the Dales and he’ll definitely go down in soap history as one of Emmerdale’s most notorious villains. So what’s his story?

Tess Harris was killed in a car accident by Kirin Kotecha. Her dying words were to tell Paddy that she loved him.

However, when Paddy came face to face with widower Pierce he lied and said his wife had died saying she loved Pierce.

But when Pierce was given Tess’s belongings he discovered the truth about her cheating. And when he showed Paddy’s wife, Rhona, she worked out who the mystery man was.

Determined to track down the person who’d killed his wife, Pierce came to live in the village and even took Rakesh Kotecha’s job at his old firm.

But he showed a sinister side when he threatened Vanessa Woodfield in an attempt to find out where Kirin had gone.

Was Pierce married to Rhona?

Pierce grew close to Rhona and the two betrayed spouses began a relationship.

Lots of people – including Marlon – were concerned about the romance and Paddy was furious.

The two men brawled more than once, and tried to undermine each other. Pierce ended up paranoid and unsettled and decided to leave Emmerdale.

But on his way to Leeds Airport, Pierce was involved in the huge accident on the Hotton bypass – caused when Emma Barton pushed husband James to his death.

All three survived the crash, but Pierce’s paranoia grew worse.

He was convinced Rhona wanted to leave him for Paddy. His anger scared Rhona and he agreed to go to counselling.

Pierce and Rhona got engaged. Rhona’s best friend Vanessa was concerned about their relationship and Pierce began undermining her friendship with Rhona.

He became more controlling and sinister and eventually on their wedding day, Pierce violently raped his new wife.

Rhona reported Pierce and bravely faced him in court when he went on trial.

Pierce was found guilty and sentenced to five years behind bars. But Rhona’s relief was short-lived…

In December 2019, Rhona was horrified to discover that Pierce was being  released on parole.

A month later, Pierce celebrated his new-found freedom by skulking round the village and bashing Rhona’s new boyfriend, Graham Foster, over the head.

The men fought and Pierce eventually killed Graham in what became one of Emmerdale’s biggest ever whodunnits – although it was a while before the murderer was revealed on-screen.

Pierce Harris in Emmerdale out for revenge

With Graham dead, Pierce set Marlon Dingle up to take the blame.

Meanwhile he decided to get in with Kim Tate and posing as a solicitor called Ollie, tricked his way into her trust, too.

Kim thought Ollie could be helpful in her son’s battle for custody of his daughter, not realising he was actually a dangerous killer.

But when Vanessa spotted Pierce hanging around she was the one in danger.

Pierce bundled poor Vanessa and son Johnny into Mulberry Cottage, which was empty as owner Laurel was away.

He kept Vanessa captive for weeks, intending to keep her there until he could win Rhona back.

Eventually he lured Rhona to the cottage, but the brave vet managed to trick him into confessing to Graham’s murder while she live-streamed his words to the Free Marlon website.

And as if that wasn’t enough, Rhona then managed to inject him with a bull tranquiliser and watched as he slumped to the ground just as the police arrived.

Pierce was arrested and eventually he was back behind bars serving life for kidnap and murder.

So it seems Emmerdale is free from Pierce Harris for now. But will he ever return to terrorise poor Rhona again?