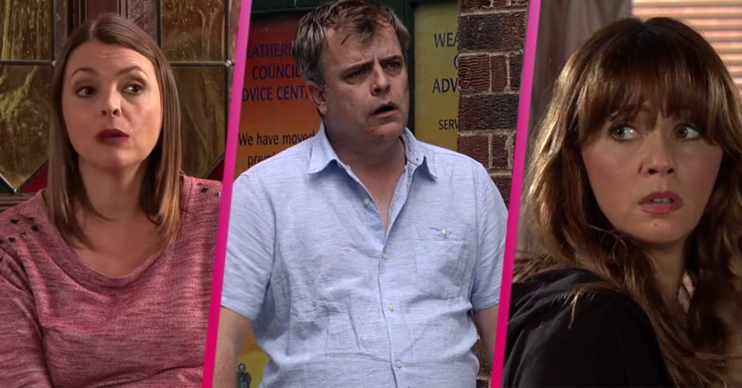 Coronation Street QUIZ: These characters have all done time – can you remember the crime?

There are 13 current characters who've been banged up

Coronation Street characters often find themselves banged up – whether they’ve commited the crime or not!

With Yasmeen Metcalfe the latest person to find herself in police custody, she’s set to be charged and next week appears in court.

Read more: Corrie villains – can you remember how they died?

But how many other current Coronation Street residents have been inside?

Can you remember what these questionable suspects did time for?

Take our quiz and find out how much you remember!

1. Tracy McDonald (neé Barlow) served time between 2007 and 2010 before being let out on a technicality, but what crime got her sent down in the first place?

B) Tampered with Michelle’s car brakes causing a fatal crash

D) Pushed Ken down the stairs

A) Violently apprehended a burglar who turned out to be Sophie’s girlfriend, Maddie

B) Burned down the garage for the insurance money

3. Newly appointed councillor Sally Metcalfe, found herself in prison over Christmas 2018, but why?

A) Attacked husband Tim after he snogged her sister Gina

C) Killed Duncan’s wife in a hit and run

4. Gail Rodwell has never been lucky in love, but she was even unluckier in life in 2010 when she found herself behind bars and in a cell with Tracy! What was Gail accused of?

B) Pushing devil child David Platt down the stairs

D) Assualting Eileen after a very public fight on the cobbles

5. Gail’s son David Platt has been in prison more than once, but last found himself banged up last year. Why was he serving time then?

B) Pushing mum Gail down the stairs

6. You’d never have thought meek Maria Connor would end up behind bars, but that’s where she spent Christmas 2016. Why?

A) Attacking love rival Eva Price with her hairdressing scissors

7. Rogue Peter Barlow has been in trouble many times, but why did he go to prison in 2014?

D) Setting fire to his boat in an insurance scam

8. Steve McDonald has also served time, but what was his crime?

A) Beating up drug dealer Jez Quigley leading to his death

B) Caused a car crash while driving without a licence

9. Gary Windass might be the soap’s resident killer escaping justice right now, but he has been inside before – for what?

A) Assaulting a police officer while in the grips of PTSD

B) Sabotaging the factory roof

C) Killing Pat Phelan with a plank of wood after he insulted Gary’s mum, Anna

10. Izzy Armstrong might not seem like an ex-con, but she’s done time. Why was she imprisoned in 2016?

A) Stealing baby Jake after surrogate Tina wanted to keep him

D) Staging a protest at the factory

11. Tyrone Dobbs was in prison in 2013 awaiting trial. Although he was found innocent in court, what was he in the dock for in the first place?

A) Burning down the garage in an insurance scam

12. Abi Franklin has a history with the police, but what was she most recently inside for in 2018?

C) Pushed Seb off a ladder while he was window cleaning

13. David Platt’s former cellmate Paul Foreman came to the Street after he was released from prison to see his sister Gemma Winter. What crime had Paul committed?

A) Beating up his rapist Kel Hinchley

How did you get on? Leave us a comment on our Facebook page @EntertainmentDailyFix and let us know what you think of this story.