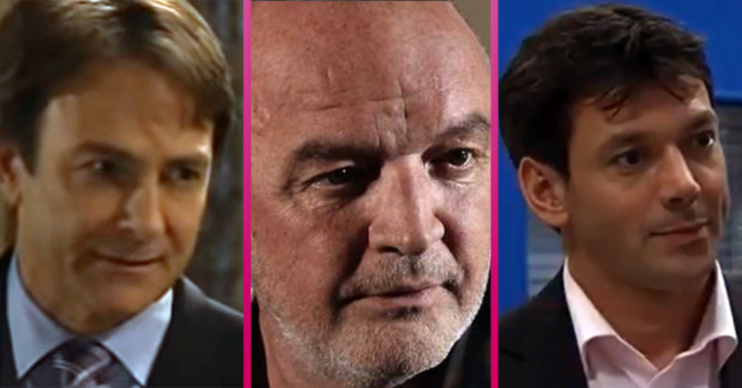 Coronation Street villains: Can you remember how these baddies died? Take our quiz and find out!

Coronation Street has had its fair share of nasty baddies who have met their maker, from Pat Phelan to Alan Bradley.

Currently Geoff Metcalfe is the most hated man on Coronation Street, but he’s still alive and kicking – for now.

So who came before him and had us shouting at our television screens? And can you remember how they died?

Take our quiz and find out.

1. Between 1986 and 1989, Coronation Street domestic abuser Alan Bradley persecuted wife Rita, but how did he die?

a) Stabbed by an inmate while on remand in prison

b) Crushed by a lift in the Arndale Centre

c) Run over by a tram in Blackpool

d) Drowned himself in the Lake District

2. Serial killer Pat Phelan, whose five-year reign of terror on the Street came to an end in 2018, ‘died’ twice. But what finally finished him off?

a) Pushed off a cliff by wife Eileen Grimshaw

b) Shot by Michelle Connor on her wedding day

c) Stabbed by Anna Windass in the kitchen of the Bistro

d) Strangled by his own hostage Andy Carver

3. Gail Rodwell’s third husband, Richard Hillman, wasn’t the perfect man after all when he began conning and killing her neighbours. In 2003 he died – but how?

a) Emily Bishop finished him off with a crowbar

b) Gail smashed his briefcase over his head

c) Pushed off a bannister by business partner Duggie Ferguson

4. John Stape might have seemed like a mild-mannered teacher, but he also added kidnapper and killer to his CV. He meet his maker in 2011, but what killed him?

a) Suffered a fatal heart attack in hospital

b) Crashed his car after a chase with Kevin Webster

c) Died in a fire started by his daughter, Hope

d) Was a victim of the tram crash

5. Jealous Tony Gordon wanted Carla Connor all to himself so had her lover Liam Connor killed. The murder led to a downward spiral for Tony who eventually died in 2010 – but do you know how?

a) Carla shot him

b) Killed in an explosion after setting fire to the factory

c) Hayley Cropper suffocated him with her red mac

d) Thrown into the canal by Roy Cropper

6. Drug dealer Callum Logan was always a wrong’un and he died in 2015, but his body wasn’t found for a year – what happened to Callum?

a) Overdosed on his own drugs

b) Hit over the head with a wrench by Kylie Platt

d) Run over by Tyrone Dobbs

7. Coercive controller Charlie Stubbs met his maker in 2007, but who finally took their revenge?

a) Tracy Barlow hit him over the head with an ornament

c) Lover Maria Connor lashed out with her hairdressing scissors

d) David Platt beat him to death for Tracy, who he had a crush on

8. Firman’s Freezers supervisor Anne Malone didn’t take it well when Curly Watts rejected her and set out to destroy his life, but her plan backfired when she died – how?

d) Killed in a struggle with the Firman’s security guard, Trevor

9. Loan shark Rick Neelan had few friends on the cobbles, least of all in-debt Gary Windass. He died last year, but what finished him off?

b) Offed by his ex-wife Laura, who has now returned to cover her tracks

d) Killed by Gary in a dramatic showdown in the woods

10. Businessman Mike Baldwin wasn’t the killer type, but he was a dodgy wheeler dealer and womaniser. We last saw him in 2006, but how did he die?

a) Killed by Ken Barlow in a fight over Deirdre

b) Died in Ken’s arms after having a heart attack

d) Perished in a fire at his beloved factory

11. Jez Quigley was a gangster and drug dealer who murdered Tony Horrocks and terrorised Steve McDonald. He met his maker in 2000, but what eventually killed him?

b) Overdosed on cocaine

c) Run over by Steve McDonald in his taxi

d) Locked in a cellar and left to die

12. Conman Lewis Archer had gone straight when he returned to win back Audrey Roberts’ heart. But their love wasn’t to be when he died on New Year’s Day 2019 – but how?

a) Gail offed him after he stole £40K off her

b) Fell overboard on a cruise with Audrey

d) Suspected heart attack with an engagement ring in his hand

13. Yet another bad boy drug dealer, Ronan Truman appeared between 2017 and 2018 and terrorised Michelle Connor and her sons Ryan and Ali. How did he die in the end?

a) Ryan failed to call an ambulance after Ronan overdosed

d) Heart attack after a car chase with the Connors.

14. Don Brennan was a taxi driver whose life went a bit wrong and he turned kidnapper. He died in 1997. What sent him to meet his maker?

a) A car explosion after trying to run over Mike Baldwin

c) Crashed his car into the Weatherfield canal and drowned

15. Serial sex pest Frank Foster terrorised Carla Connor after raping her in 2011, but who finally finished him off in 2012?

d) Beaten to death by Peter Barlow in defence of Carla

How did you do? Who is your ultimate Coronation Street baddie? Alan Bradley gets our vote. Leave us a comment on our Facebook page @EntertainmentDailyFix and let us know what you think of this story.