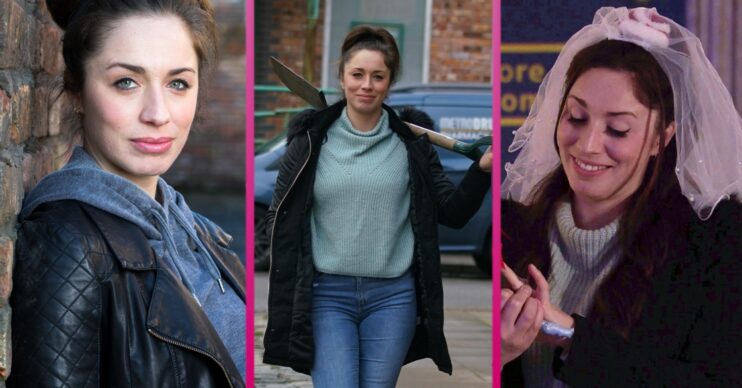 Shona Platt in Coronation Street: Her dark past and her murderous son

Could something huge be around the corner for unsuspecting Shona?

Shona Platt in Coronation Street is married to David Platt and is a devoted stepmum to David’s children Max and Lily.

Shona has a dark past but she’s put it behind her and moved on with her family, despite being seriously injured just over two years ago.

Julia joined Corrie in 2016 after a successful career in the theatre. Shona was her first television role.

Julia is married to Ben Silver and the couple have a little boy called Franklin Wolf Silver, who was born in November 2019.

Shona met David in a bar and their paths crossed again when vicar Billy Mayhew found her sleeping rough and took her in.

She and David fell in love but he was horrified when she revealed that her son – Clayton Hibbs – was the man who stabbed David’s wife Kylie to death.

With their romance in tatters, David couldn’t get over Shona’s past. But when she helped save his niece Bethany from the clutches of evil Nathan Curtis, they grew close and were soon rekindling their love.

When David was raped by Josh Tucker, he struggled to cope and he withdrew from Shona. He told Shona he didn’t love her any more and she moved out.

But after the death of Aidan Connor, David told Shona the truth about what had happened to him and she helped him come to terms with his trauma.

After David was banged up – wrongly – for attacking rapist Josh, Shona planned a wedding.

The pair were due to wed at the Bistro when David was released. But though Shona was ready and waiting, there was no sign of David. Would he make it in time?

Luckily, he arrived at the last minute, and the pair tied the knot, with Shona in her wedding gown and David in his prison clothes!

At Christmas 2019, Derek Milligan went on a gun rampage around the Street. He killed Robert Preston, and shot poor Shona.

She received devastating injuries and because her brain was deprived of oxygen when she went into cardiac arrest, she suffered brain damage.

Shona lost memories and had to learn how to live normally again. But once more she and David managed to get over their obstacles and their romance got back on track.

And a year after their wedding and Shona’s injuries, David sweetly recreated their big day because Shona had forgotten it all.

What’s next for Shona?

Shona seems to be back on track, co-parenting Max and Lily and happily working in Roy’s Rolls. She even stepped in to help at the Kabin when Brian and Cathy headed off on holiday recently.

And she’s supported David and Max through the teen’s recent troubles.

But if we know Corrie – and we do – when a character seems settled and happy, that’s when the drama happens!

Could something huge be around the corner for unsuspecting Shona?