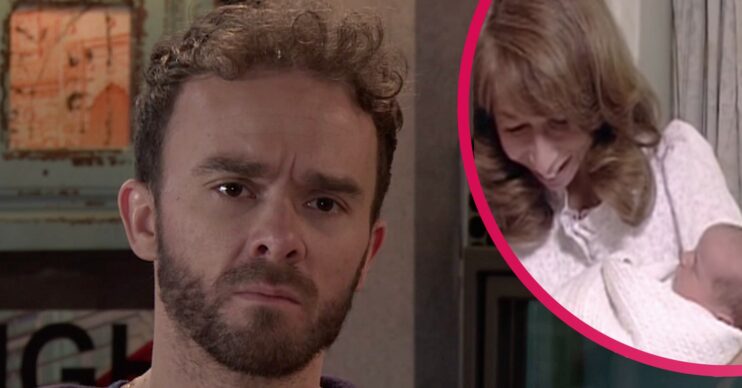 David Platt in Coronation Street: Who is he? How many times has he been married?

He was born on screen on Christmas Day 1990, and he's been attracting trouble ever since!

David Platt in Coronation Street is the son of Gail and Martin Platt. He’s the younger brother of Nick Tilsley and Sarah-Louise Barlow, and husband to Shona Platt.

David’s got one adopted son, Max Turner, whose mum was his first wife Kylie Platt. And he and Kylie also have a daughter, Lily Platt.

Actor Jack P Shepherd has played David Shepherd for more than 20 years. He made his first appearance on screen on Christmas Day 2000, when he was just 12 years old.

Jack had roles in Wycliffe and Clocking Off – where he played alongside his on-screen sister Tina O’Brien, aka Sarah – before he joined Corrie.

And he has a son called Greyson Milewski, whose mum Sammy had a one-night stand with Jack.

Jack is now loved up with Hanni Treweek, a former storyliner on the show.

Troubles on the Cobbles

David was born on screen! He arrived on the Street on Christmas Day in 1990. And since then his life in Corrie has been full of drama!

He was just a youngster when mum Gail fell for serial killer Richard Hillman. David was in the car when Richard drove his new family into the canal and tried to drown them.

And since then he seems to have attracted trouble!

He even got involved with Tracy Barlow’s fatal romance with Charlie Stubbs. David knew his friend Maria Sutherland was having an affair with Charlie and tried to blackmail him. But Charlie got revenge by attempting to drown David in the bath! The shocking scenes were so violent they attracted many complaints from viewers.

When David got together with Tina McIntyre they seemed made for each other.

But when Tina had an abortion and David discovered his mum knew about it, he shoved poor Gail down the stairs and then smashed up the street, hit Ken Barlow and attacked a policeman. Oops!

Not surprisingly, David went to young offenders for a while. When he came out, he and Tina split and she began a romance with Graham Proctor.

When David knocked Graham over everyone assumed he’d done it deliberately, but it turned out David had epilepsy.

David met and married Kylie Turner after a whirlwind holiday romance. Gail wasn’t impressed at first but the pair were in love and David helped Kylie get custody of her son, Max.

Their romance wasn’t all plain sailing but they had another child, Lily.

Max’s dad, Callum Logan, came to the Street but he was a nasty piece of work and when he attacked Sarah, Kylie killed him.

David helped the women cover up their crime and hid the body down a manhole in the house. The body was found a few months later after a car accident and Tony Stewart – Jason Grimshaw’s dad, who was feuding with Callum – was blamed.

Kylie decided she didn’t want to live in the house any more and the family planned to move to Barbados to be with Kylie’s sister, Becky.

But tragically Kylie was stabbed by Clayton Hibbs and died in David’s arms on the cobbles.

David Platt on Coronation Street fell for Shona Ramsay, without knowing that she was Clayton’s mum.

It took him a long time to come to terms with her being linked to the man who murdered his wife, but when she helped rescue David’s niece Bethany from the sexual exploitation gang, they began to make a go of it.

They married and have stuck together, through Shona’s devastating brain injury.

David made a new friend, Josh Tucker and the pair became close.

But Josh drugged and raped David after a night out and David struggled to cope.

He lashed out at his family, split from Shona, and brutally attacked Gary Windass.

Eventually, though, after Aidan Connor took his own life, David spoke out about what had happened to him. And with Shona’s support, he saw Josh put behind bars for his crimes.

What’s next for David?

In the aftermath of Max finding out about David’s rape, the devoted dad is struggling with the behaviour of his troubled stepson.

Max has even attempted to drug Daniel to make him understand what happened to his dad. But Max’s plan went awry and he accidentally drugged Amy Barlow instead!

David’s intervened on his son’s behalf, and done a deal with Daniel, promising to keep quiet about Daniel shoving Max downstairs, if he keeps schtum about the drugs stuff.

But will their agreement stand? David’s got a habit of attracting trouble, and we reckon it won’t be long before things are falling apart again. What do you think?