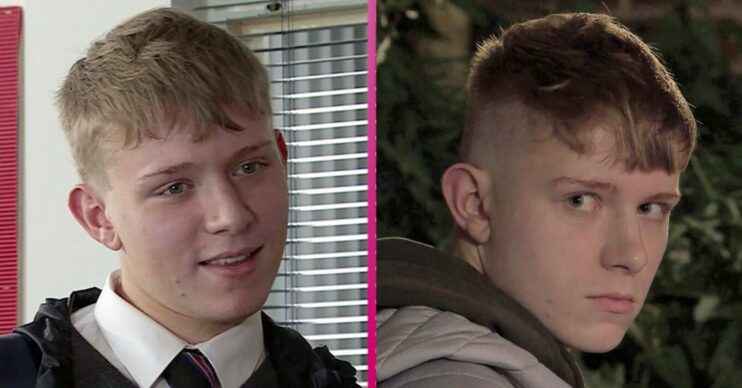 The teenager has recently turned very nasty towards his family and friends – but last night took it too far.

It was revealed he had made a conspiracy theory video for social media where he was questioning the murder of his own cousin Sam’s mum Natasha.

And when he was left to look after Sam, Max began filming him for a sequel.

It was only when he uploaded the video nasty that Summer Spellman saw it and charged round to demand he take it down.

She also exposed its existence to Sam’s dad Nick, leaving him furious.

Nick was disgusted with his nephew, telling him: “What were you thinking? You know Sam’s struggling. It’s sick.”

He added: “It’s a video nasty. It’s all about Natasha and the sinkhole and played out like some trashy conspiracy theory. What were you thinking?”

Even kind-hearted Summer laid into him for dragging her into it all.

He dedicated the sick video to her as part of his childish crush.

His dad David was so horrified he confiscated all of Max’s electronic equipment.

However as he was dressing down his son, Max got angry and tried to punch David.

Fans are outraged – and can’t stand how Max’s personality has changed.

One said: “Corrie, what’s happened to Max! Not only has he had a face change but he’s had a personality transplant.”

A second said: “I’m not sure what’s more shocking, Max having a new head or his complete personality transplant Corrie”

However a third Corrie fan said: “When did David turn into Gail? Already bored of personality-transplant Max Corrie.”

“Max crossed the line last night in more ways than one. That kid should be ashamed of himself,” added someone else.

A fifth said: “Poor Sam why would Max do that? That’s cruel he’s an idiot.”

Actor Paddy Bever recently took over the role from Harry McDermott who had played Max since 2010.