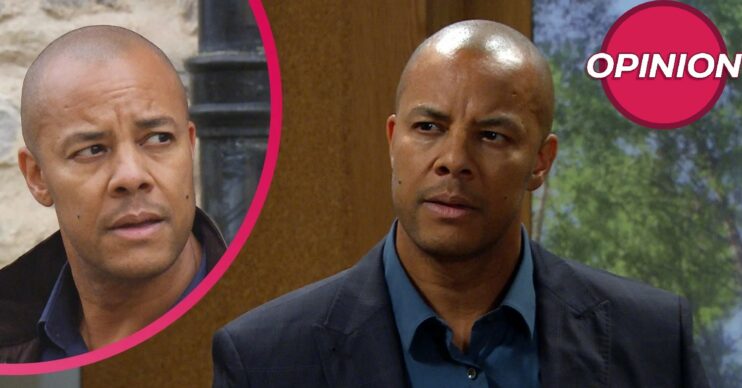 The businessman father of Ellis Chapman arrived in the village in 2019 and promptly destroyed Marlon Dingle’s marriage to Jessie Grant.

And it’s only been downhill since then.

For almost three years he has been an annoyance in the village.

Neither a fully-fledged villain – he doesn’t have the brains – nor a fully developed character with nuance and light and shade.

He is nothing more than a panto villain – not that anyone would bother to warn you he was standing behind you.

The material he’s been given has been ropey at best.

Emmerdale needs to be ruthless and cut Al

And he can’t be expected to develop a character who has none.

Whether he’s pretending to have killed Graham Foster, or blowing up The Woolpack with a whisk and a microwave – Al doesn’t know who he is.

For a brilliant businessman he doesn’t have any brilliant ideas.

And he certainly doesn’t have a work ethic.

He doesn’t even have a job at the moment!

Other than sleeping with Kerry Wyatt, he doesn’t add anything to the village.

And then there was the half-baked affair with Debbie Dingle behind Priya Sharma’s back.

Admittedly that storyline did manage to see off Debbie for good – meaning it’s not all bad – but we got lumbered with Al for even longer.

Now his son and ex are gone for good, there is literally no reason for him to still be in the village.

Soap bosses manipulating events so he becomes involved with Belle Dingle is just too much to believe.

He is a truly dreadful and awful creation – just like his girlfriend Kerry Wyatt – and he should be axed immediately.

And if he could take Kerry with him, there will be millions of grateful viewers.