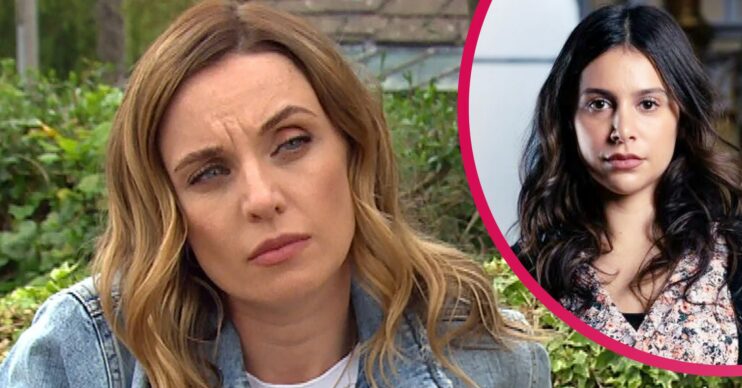 Emmerdale fans are convinced Andrea Tate is still alive despite Meena Jutla confessing to her murder.

The theory is that the wedding planner wasn’t actually murdered by Meena and instead survived and is in witness protection.

And ahead of Meena’s trial next week, we’ve found five clues that mean it’s the truth. Maybe.

Actress Anna Nightingale may have given the biggest clue away that Andrea isn’t dead – her exit itself.

Anna went off on maternity leave – and would have been leaving for that regardless of story.

Could she return after she’s finished maternity leave? The timing would be right…

2. There was no body

It is a truth universally acknowledged that in Soapland – and especially Emmerdale – that if you don’t see a body, then they’re not dead.

It was true of Jamie Tate, it was true of Kim Tate – and it’s the reason it may very well be true of Andrea Tate.

3. Why didn’t Andrea use the walkie talkie?

Andrea had the chance to alert people to her plight with the walkie talkie near her during the attack.

It was within reach as she apparently choked to death on the smoke.

However she didn’t use it – so clearly she either already had help, or didn’t need it.

4. Her Mum’s arrival suggests Andrea is still alive in Emmerdale

When Andrea’s death was supposedly revealed – you’d expect her family to come running.

However it was weeks before her mum Hazel turned up.

And then it was only to collect daughter Millie.

It was then revealed she was working with Jamie – who had also faked his death – so why not Andrea too?

While it was repeatedly stated how close Andrea was with her sister, viewers never actually met her.

And when she didn’t turn up for Andrea’s memorial service – or at all after her ‘death’ – that’s enough to confirm it almost.

A close sister would have been there for Andrea after death – unless she was with her already.

Read more: Who is in the cast of Emmerdale for 2022? Meet the full line-up here!

This week on screen has seen Jamie Tate’s big secret busted by Gabby Thomas and she determined to get Dawn Fletcher to help her confirm it.

It’s all thanks to a baby monitor and Millie who revealed to baby brother Thomas Jamie was still alive.

But neither Gabby, Dawn, nor the viewers have actually seen him. Is he holed up with Andrea somewhere hiding out? Are they in witness protection together?

It seems too much of a coincidence to revisit this storyline a mere days before Meena’s trial begins.

Is Andrea set to walk into the courtroom next week and expose Meena? Could her evidence be the final nail in her coffin?

And what would it mean for Manpreet and Charles’s future?

Could they stay together if Andrea is back in town?

The storyline possibilities are endless – Emmerdale would be fools to keep her dead.

Do you think Andrea is still alive?