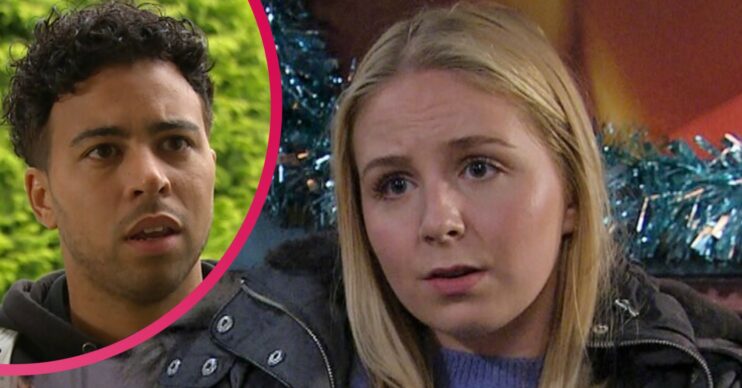 Who is Belle Dingle in Emmerdale? Is she getting together with Ellis?

Belle and Jamie dated in the past

Belle Dingle has been in Emmerdale since 1998. She’s had several romances and it looks like she has eyes for Ellis Chapman again. Will it all end in tears?

Belle has also dated Jamie Tate, but that also didn’t end well either. In fact, none of her romances have been particularly successful – and she’s only 23!

So will she and Ellis really manage to make it work this time?

Belle Emmerdale: Who is she and who are her family?

Belle Dingle’s full name is Tinkerbelle Lisa Dingle. She was born on Christmas Day 1998 and is the daughter of Lisa and Zak Dingle.

Her birth came as a shock to her family as Lisa had no idea she was pregnant. She was delivered by vet Paddy Kirk and was born in the Wishing Well cottage pigsty.

Belle has five half brothers and a half sister. Her half-brothers are Nathan Dingle, Ben Dingle, Butch Dingle, Sam Dingle and Cain Dingle. However Ben and Butch have died.

Her half-sister is Tina Dingle. Only Sam and Cain currently live in the village.

Belle was originally played by twins James and Emily Mather. James stopped playing Belle in 2000 however Emily continued the role until 2005.

In 2005, Eden Taylor-Draper began playing the character and has played her since.

Belle Emmerdale: Who has she dated?

When Belle was 11 she had a crush on her friend Will Wylde and declared her love to him before he left the village after his mum Natasha murdered his dad Mark.

Her first real boyfriend was Dan and Ali Spencer’s son Sean who she kissed on her 13th birthday. However their relationship was complicated as he got her best friend Gemma Andrews pregnant.

Then came Luke Salter, an ex of Gemma. Belle really wanted Luke to be the first boy she slept with but cousin Debbie grassed them up and Lisa put a stop to it.

She also had brief romances with Sean’s friend Thomas King and Kirin Kotecha.

Later Belle had an affair with married doctor Jermaine Bailey. She faked a pregnancy to keep him by her side. However things soured and when he moved to America, she decided to stay in the village.

Her next serious relationship was Lachlan White. But she was horrified when she found out he was a serial killer.

What happened between Belle and Jamie Tate?

The two worked at the vets together and grew closer when he split with Andrea.

Belle began having an affair with Jamie, although he had got back together with his wife Andrea.

When Andrea found out about Jamie’s affair she was devastated. However Jamie soon ran over Belle’s sister-in-law Moira Dingle.

He went to Andrea after the incident and his mum Kim helped him to cover up what happened.

When the Dingles found out what Jamie did, Belle seemed to side with her boyfriend. But she tricked him into showing her where the car parts linking him to the crime were.

However things took a twist when Jamie pinned the crime on Belle. As it looked like she should be going back to prison, her nephew Nate stepped in and took blame for the hit and run.

Nate got a suspended sentence. But the stress and guilt over Nate got to Belle.

Belle, who has schizophrenia, stopped taking her medication and she began to hear her mum Lisa’s voice.

After that, Belle received help. However she was unable to forgive Jamie for what he put her through.

Belle and Ellis had started to fall for each other when he left for Dubai.

After spending a few months working out there, he returned (with a new face!) and things were strained between them. It was clear they had drifted apart.

However, now it seems those feelings are set to be rekindled.

Belle and Ellis have been sharing a few moments and it’s clear Belle wants things to move further.

Priya spots them together over Christmas and immediately feels their laughing and joking means they’re back on.

But Ellis was falling hard for Priya. Although she has pushed him away following the fire in which she sustained horrific burns, those feelings don’t just go away overnight.

Will Ellis choose Belle or Priya?

As he starts to grow close to Belle again, is Priya set to be left out in the cold?

Fiona Wade, who plays Priya, has said: “I think there’s genuine feelings there, it’s just everything keeps getting in the way for them, which is really sad.

“I always say, this is a soap, so I don’t know whether there ever are any happy-ever-afters…”

Does that mean Ellis will choose Belle? And what will that mean for heartbroken Priya?

What do fans think?

Viewers at home are just really keen for Belle to have a proper storyline again – any storyline!

One asked on Twitter: “When is Belle going to get a proper storyline again?”

Another added: “Emmerdale give Belle a storyline again, please!”

Someone else chimed in: “Where does Belle fit into Emmerdale anymore? She doesn’t have any storyline and hasn’t for a long time…she needs to go crazy again.”