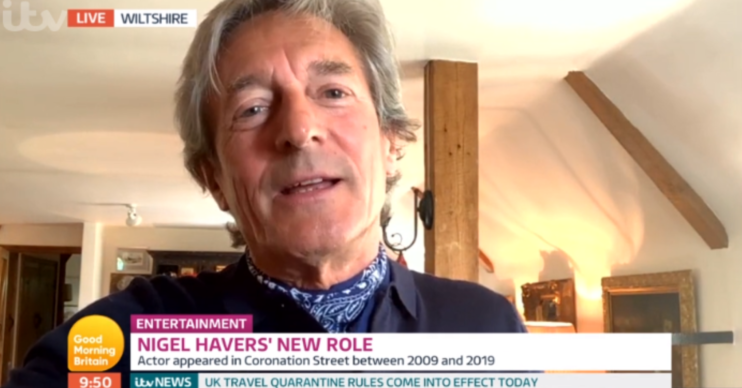 Lewis was killed off last year

Former Coronation Street actor Nigel Havers was told to brush up on his Australian accent as he revealed his alter ego Lewis Archer as a twin brother down under.

Nigel, who played Lewis on and off from 2009 until 2019, appeared on Good Morning Britain  today (Monday, June 8) with Lorraine Kelly to talk about his new show The Bidding Room.

But during the interview, Lorraine and Nigel began discussing his role in Corrie.

Although Lewis was killed off last year, Nigel revealed there is a chance he could return as Lewis’s twin brother.

When asked about Lewis potentially having a twin brother, Nigel said: “Sue Nicholls, who plays Audrey who’s a great friend of mine and she’s just the most wonderful person, and a wonderful actress. And she was genuinely upset when I keeled over.

“And she said as I left: ‘Listen, you do know you you’ve got a twin brother living in Australia, so brush up on your Australian accent.'”

Would you like to see Lewis’s twin come to the cobbles?

Coronation Street: How did Lewis die?

After years of being a conman and scamming on and off girlfriend Audrey, it appeared Lewis had finally stopped his criminal activity and wanted to settle down with the love of his life.

But when he discovered Audrey inherited £80,000 from old friend Archie Shuttleworth, Lewis began to act dodgy.

Whilst Audrey’s daughter Gail became suspicious, what she didn’t realise is Lewis planned to propose. But Lewis died before he had the chance.

When Audrey went home, she was shocked to find Lewis dead with an engagement ring in her hand.

But the day after his death, Audrey’s £80,000 had gone missing from her account and immediately the finger was pointed at the former conman.

Furious, at the funeral the hairdresser stated Lewis was a conman and she regretted ever loving him.

How would she feel if Lewis’s brother came into the picture?