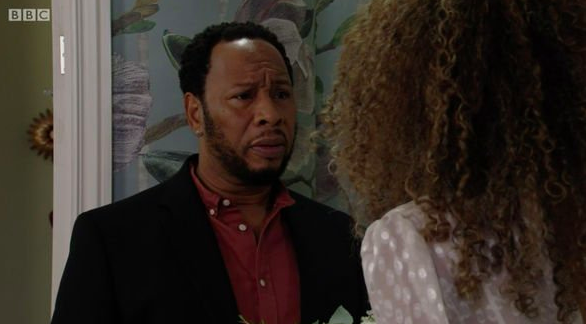 EastEnders SPOILERS: Mitch becomes suspicious of Gray – will he expose him?

Daughter Chantelle is the victim of domestic abuse

Mitch Baker will become suspicious of his son-in-law Gray Atkins in upcoming EastEnders scenes. But will he expose him?

Viewers know that Mitch’s daughter Chantelle is the victim of domestic abuse, with husband Gray lashing out in anger on numerous horrifying occasions.

Although the solicitor would look like a dream husband to an outsider, behind closed doors he’s violent towards Chantelle whenever he sees red.

Past abuse has included breaking his wife’s arm, punching her in the stomach while she was pregnant, and raping her moments after they renewed their wedding vows.

It’s fair to say, the character is despised.

However, spoilers suggest that Mitch will soon come close to discovering the truth about Gray’s despicable behaviour during the week beginning March 9.

After months, if not years of hiding his abuse, Mitch has reason to suspect Gray in scenes to air next month.

In March, Mitch will grow suspicious of Gray and become increasingly concerned about his distracted behaviour.

With Gray under increasing pressure in his professional life, it’s only a matter of time before it takes its toll on his personal life – and that means Chantelle and their two children.

And Mitch soon starts to suspect that Chantelle’s husband is hiding a big secret.

According to the soap, Mitch’s suspicions over Gray “reach fever pitch”.

The spoilers also reveal that the show won’t air on Friday (March 13) due to Sport Relief.

Next week, Chantelle finds herself in more danger as the pressure of representing Whitney starts to take its toll on Gray.

The stressed-out solicitor will lash out while dealing with the tricky case.

He grabs his wife, verbally lashes out and tells Chantelle that he is considering dropping Whitney’s case, leaving her more in fear of her husband than ever…

And how long before the kids witness the violence surrounding them?

Do you think Gray will be exposed by Mitch? Leave us a comment on our Facebook page @EntertainmentDailyFix and let us know what you think!