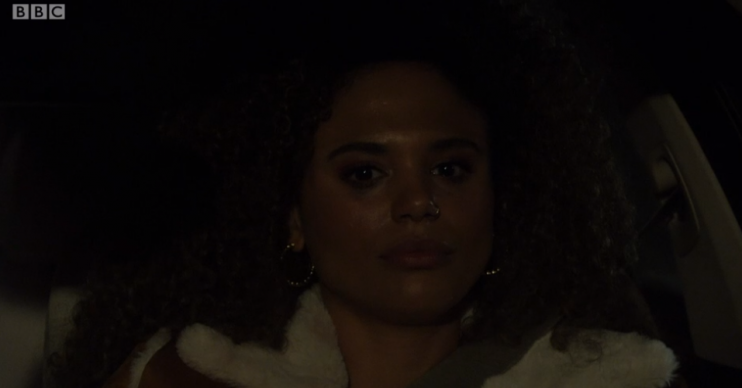 And she blamed herself for the attack

Fans of EastEnders have been left sickened after Gray Atkins broke wife Chantelle’s arm in the latest of his acts of domestic abuse.

The couple returned from their honeymoon, seemingly loved up.

But as Gray pressured his wife to take a pregnancy test, it was clear she was uncomfortable with the thought she might actually be carrying her abuser’s child.

Read more: EastEnders SPOILERS: Sonia does the unthinkable for Martin

After insisting it was too early to take a test, Chantelle headed off to catch up with family and friends – and the relief that she was back surrounded by people who cared about her was clear to see on her face.

She even bumped into old school friend Jags in the shop and found out he’d moved to the area.

CHANTELLE WHAT ARE YOU APOLOGISING TO HIM FOR?

As she helped Jags home with his shopping (what did he need with all that toilet paper?!), Gray watched on, seething with jealousy.

Once home, Chantelle was presented with a pregnancy test and Gray insisted she took it.

While they were waiting for the results, Gray quizzed her over Jags, and it was clear he was struggling to control his anger.

Things got really out of hand when the test came back negative and Chantelle said they could just try again next month.

Not happy with her reaction, Gray lashed out, grabbed her arm, and as she tried to pull away he twisted it, causing it to break.

Despite Gray insisting it just needed icing, Chantelle knew it was broken and she’d have to go to hospital.

As Gray reluctantly agreed to take her, Karen turned up, but fans hoping Chantelle would confess what really happened were left disappointed as she lied she’d tripped on the stairs.

Then as Gray and Chantelle got in the car to leave, Chantelle began blaming herself: “It’s my fault really, I can do some stupid things when it comes to us, can’t I?” she questioned before recounting a time she’d been jealous of another woman.

Fans were heartbroken, horrified and uncomfortable in equal measure as they watched Chantelle’s performance.

ONLY one person is to blame in any sort of abusive relationship and it is NOT the victim. Abusers are cunning, clever, insecure, domineering and good at reverse psychology as they make their victim feel like the one at fault.

The Gray and Chantelle sl is making me so angry🤬😡 That’s how you know it’s working. It’s supposed to make your blood boil. #eastenders #ballum

CHANTELLE WHAT ARE YOU APOLOGISING TO HIM FOR 😭 #EastEnders I know it’s a programme but thats real life for a lot of women.

That was an uncomfortable episode to watch. Poor Chantelle. @bbceastenders #EastEnders

Very heart wrenching watching Chantelle in #eastenders apologise for being a domestic abuse victim to the perpretrator!

Chantelle blaming herself is literally every victim of domestic violence. This is so so hard to watch 🥺😭 #EastEnders

Some fans have called for the soap to do something very bold and kill off Chantelle to highlight how these stories often end.

There are many who are fearful that Chantelle is going to die at her abuser’s hands.

It would also massively shock audiences. Soaps usually either redeem their bad guys or they get punished. If Gray kills Chantelle & is sent to prison, it would send out a big message to #EastEnders viewers. DA victims don’t usually survive. Sad, but true.That’s why we need to act

with every episode i become more convinced they are gonna kill off chantelle. the scene in the salon tonight showed how many friends she has and that lots of people would be affected if she died.💔 #EastEnders

Gray actor Toby-Alexander Smith has also taken to Twitter to thank the fans for expressing their feelings on the storyline.

Far from taking offence to the Gray hate, he has praised everyone for ‘calling out the real perpetrators’.

You should all know that all of you voicing your opinions on the Gray and Chantelle storyline are making a difference. I hope this storyline is encouraging a conversation and embarrasses, humiliates and calls out the real perpetrators out there. Please keep talking #eastenders