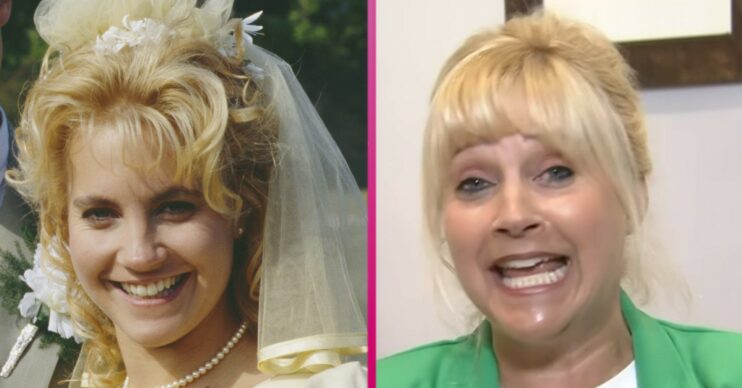 Kathy Glover in Emmerdale: Who played her? How many husbands did she have?

She's one of the show's most married - and most widowed - characters!

She arrived in Emmerdale back in 1985 with her mum, and brother Nick when she was still at school and quickly became one of the show’s main characters.

Kathy married three times during the course of her 20 years on the soap.

Who was Kathy married to in Emmerdale?

Her first husband was Jackie Merrick. She was devastated when Jackie was killed in a shooting accident.

By 1990, Kathy had caught the eye of Chris Tate. Their romance took a while to get off the ground but they eventually got married and settled down together.

But their marriage ran into trouble and Kathy had an affair with an American called Josh Lewis.

She planned to leave Chris and start a new life away from Beckindale – as Emmerdale was called back then.

But as she got ready to leave, a plane crashed into the village.

Chris was paralysed in the tragedy and Kathy decided to stay.

Kathy’s marriage to Chris fell apart when he had an affair with Rachel Hughes – who he’d later marry and who is the mother to Chris’s son, Joseph.

She started a relationship with Dave Glover and they married.

But Dave was in love with Kim Tate and just a month after the wedding he died rescuing Kim’s son James – who he thought might be his son – from a fire.

Later, Kathy got involved with Biff Fowler, who’d been married to Dave’s sister, Linda. But he jilted her at the altar.

Kathy falls for a serial killer

Being unlucky in love seemed to be a trait for Kathy. After the death of Rachel Tate, Kathy got involved with her widower Graham Clark.

But little did she know Graham had killed Rachel – and his first wife, too.

The couple planned to leave the village but as they did, Kathy twigged that Graham had killed her pal.

She escaped the dramatic confrontation that followed, but Graham died.

Who was Alice Bates and why did Kathy take her?

Kathy’s brother, Nick, had a daughter, Alice, with Elsa Chappell.

Nick was sent to prison in 1996 and as Elsa had moved away, Kathy was left to care for Alice. At first she wasn’t happy about raising a young child, but she eventually bonded with Alice.

However, Elsa returned from Australia in 1999 and wanted to get to know her daughter. She eventually took Alice back Down Under with her.

Kathy eventually gave Alice up, but when she visited her in 2001 she felt the little girl was being neglected. She brought her back to the Dales without telling Elsa.

Elsa followed, however, and went mad at Kathy for taking her without her knowledge. She insisted Alice was coming home with her.

In 2001 Kathy left Emmerdale after reaching a compromise with Elsa and agreeing to move to Australia so she could help care for Alice.

A year later, the villagers were told that Kathy had married and had a baby girl. Could her daughter ever come back to the village?

Kathy returned in 2005 for Seth Armstrong’s funeral. She’s not been back since, but we’re still hopeful!

Who played Kathy Glover in Emmerdale?

Kathy Glover in Emmerdale was played by Malandra Burrows. Malandra – whose name is a mixture of her parents’ names, Malcolm and Sandra – had been in Brookside and other television shows before.

But the part of Kathy, then Kathy Bates, was her first leading role.

Malandra has appeared on stage in many different roles and is a regular in pantomime.

Malandra had a brief singing career. Her 1990 single Just This Side of Love reached number 11 in the charts.

She recently revealed she is battling breast cancer.

After several operations she is facing gruelling radiotherapy followed by chemotherapy, but is remaining positive.