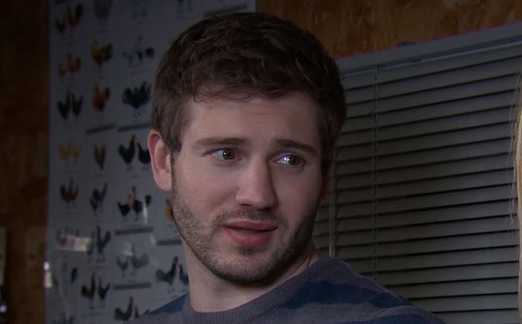 Fans of Emmerdale have been left baffled by Jamie Tate’s age once again.

In last night’s episode of the soap (Monday February 10 2020) Jamie was talking to co-worker Belle Dingle about his life falling apart.

As they spoke in the vets, he talked about him splitting from wife Andrea and their custody battle for daughter Millie.

Admitting he was afraid of being alone, Belle told him that wouldn’t happen.

He responded saying: “Belle, I’m a 23-year-old soon-to-be divorcee who lives at home with his overprotective mum. What a catch!”

Viewers were shocked by Jamie’s age, as they expected him to be older.

Jamie 23, thought it was 7 Uni years to become a vet #emmerdale

According to Emmerdale fan Wiki, Jamie was born on September 24 1996, which does make his age 23.

But it seems the show have made him seem older than he is.

It’s not the first time viewers have been left confused by Jamie’s age. Some questioned his age and relationship last year when his wife Andrea and daughter Millie first arrived in the village.

However, ED! contacted Emmerdale’s reps for comment at the time and they said: “They’ve been together about five years but not married that long.”

After Belle and Jamie’s conversation, they ended up sharing a kiss, but were interrupted when they heard a noise.

Fearing it was her boyfriend Ellis, Belle ran to have a look but there was no one there.

Later Belle was confronted by Jamie’s mum Kim, who warned the vet receptionist to keep away from her son.

It was revealed a couple of weeks ago that Jamie and Belle had slept together on the night Graham Foster was killed.

His estranged wife Andrea gave him an alibi, as she had run over Tip the dog, but didn’t report the accident.

However, Andrea has no idea what Jamie was really up to.

Jamie and Belle decided to keep their night together secret as Jamie didn’t want to complicate things with Andrea or ruin Belle and Ellis’s relationship.

Will the truth come out now Kim has caught them?