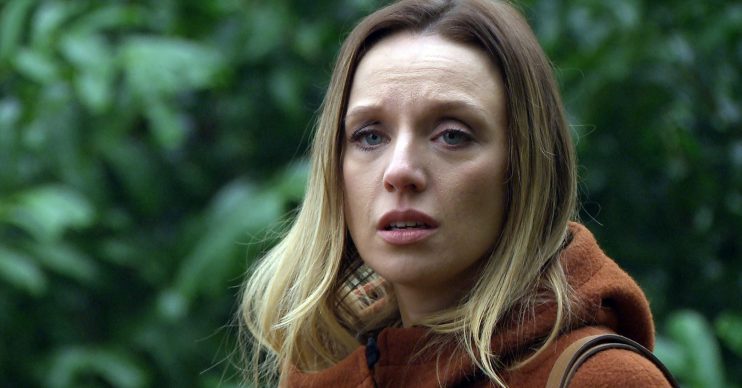 Andrea appears to have fled the village

In recent Emmerdale episodes, Jamie and Belle’s affair was exposed by Andrea and Leyla in front of everyone in the Woolpack.

Whilst Andrea pretended to know nothing about it, it was all part of her plot for Jamie to blame Belle. She hoped it would split them up and he would come crawling back to her. However things haven’t quite gone to plan.

In tonight’s visit to the Dales (Wednesday, June 3) Andrea and Jamie went back home after the affair was revealed.

Although Andrea desperately tried to make Jamie see that they could try again, he admitted he was in love with his colleague.

When Andrea let slip that she had seen the country hotel that Jamie planned to take Belle to, he started to realise that she knew about the affair.

Andrea eventually admitted she found out about Jamie and Belle weeks ago at the Easter egg hunt. When Jamie realised Andrea had set him and Belle up and it wasn’t his lover who exposed the affair, he immediately went out to apologise to her.

Later, he spoke to his mum Kim about moving back in with her. But as he went to pack up his stuff he realised Andrea and Millie’s stuff was gone.

As well as their belongings being gone, there was no sign of Jamie’s wife and daughter. Where have they gone to?

Emmerdale: Where has Andrea gone?

Whilst no information has been released on where Andrea has gone to, in the episode she mentioned her and Jamie going away together somewhere.

Perhaps she has taken Millie away from the village, knowing the gossip that will be floating around?

Or has something more sinister happened?

Emmerdale: What happens next for Andrea and Jamie?

Unfortunately for fans, they will be waiting a few weeks to find out where Andrea and Millie have gone.

Next week, Emmerdale be will airing special lockdown episodes. Two episodes will air every week for three weeks.

Has Andrea left Emmerdale for good?

It has not been announced if Andrea is leaving or if actress Anna Nightingale has left the show.

In an ITV trailer released last month, the police could be heard telling Jamie and Belle they were “treating this as a high-risk missing person’s case”.

Has Andrea faked her own disappearance to frame those who wronged her?

Or has something really awful happened to her?

While we can always assume Andrea will return, soaps are known for shocking storylines and exits.

Viewers had a mixed reaction to her shock departure…

Jamie chooses Belle so Andrea immediately takes off with Millie really? What happened to fighting for her marriage? #Emmerdale 🤔

No worries Kim will find Andrea in 15 minutes! She’s that good. #emmerdale

Kim " andrea hasn't got any more ammunition." You forgot about the child… good on andrea 👏🏻👏🏻 #Emmerdale

Emmerdale airs Sam and Lydia’s lockdown episode on Monday, June 8, at 7pm. Cain and Aaron’s episode is on Wednesday, June 10, at 7pm on ITV.

Do you think Andrea will return? Leave us a comment on our Facebook page @EntertainmentDailyFix and let us know what you think of this story.