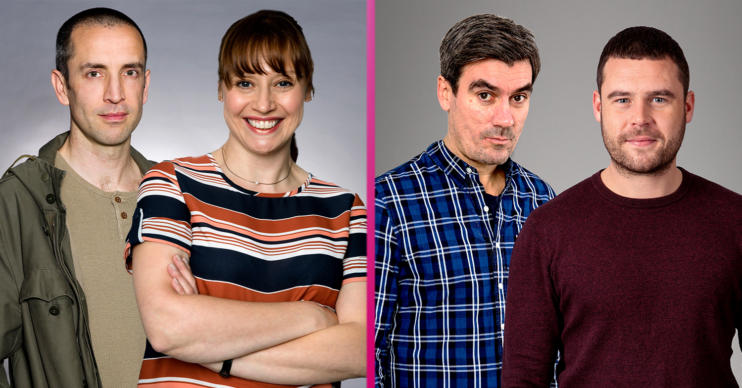 Sam and Lydia are followed by Cain and Aaron

Emmerdale begins airing their special lockdown episodes next week kicking off with Sam and Lydia, and Cain and Aaron.

The soap was forced to stop filming due to the coronavirus pandemic with ITV releasing a statement at the time.

“The health and well-being of the production teams, actors, crew and their families is of paramount importance to us and we now feel that the time has come to stop filming.”

However, it was recently revealed Emmerdale was the first soap to return to filming with a series of six special lockdown episodes, focusing on mainly duos of characters.

Executive producer Jane Hudson said: “Lockdown has created an opportunity for us to focus on what is important in our lives.

“When we first discussed commissioning these episodes back in March the writers instantly rose to the challenge.

“Seven weeks into lockdown and the scripts have an added poignancy and meaning. The response from everyone at Emmerdale to filming these episodes has been fantastic and we’re really grateful for their support.”

So what can we expect from the first two lockdown episodes next week?

Newlyweds Sam and Lydia find themselves all alone as lockdown begins. Samson is stuck on his school trip and they’ve kicked Mandy and Vinny out.

Sam seemingly won’t let Lydia leave the house, he’s clearly concerned about something, but what?

Lydia, however, is fed up. She’s sick of the same meal over and over and does a click and collect shop.

Sam is absolutely furious when he finds out, he shouts at Lydia and it’s soon revealed what is really going on with him.

Can they work out their differences and reconcile?

Karen and James reveal all

Speaking about the special episodes, Karen Blick, who plays Lydia said: “It is a real privilege as it feels really momentous. It feels like a piece of television history so I am thrilled to be involved.

“I spoke with the Executive Producer, Jane Hudson, when they first mooted the idea that these episodes would go ahead.

“The script is fantastic, it is really funny and has got the best of Sam and Lydia. All the aspects are there, the heartfelt stuff that the audience really like to see but also the comedy, the quirkiness and a bit of daftness thrown in as well.”

James Hooton, who plays Sam, added: “It is not all fun and games. Just as the lockdown process has not been fun and games for everyone.

“But in this episode we see a bit of light-hearted jovial stuff between Sam and Lydia, and then we see a different side, the emotional and serious stuff.

“Sam’s concerns come to a bit of a head and the characters have a couple of fall outs in the episode. It is a bit of a journey for both of them. It has been really well written.

Aaron is isolating with his uncle Cain, but Cain is adamant he doesn’t want to talk about feelings

A letter arrives with a prison stamp on it, but Cain hides is so Aaron doesn’t slip back into despair over Robert.

When the pair get drunk and Cain lets slip about the letter, Aaron is furious and during an argument, Aaron issues some home truths about Cain and Moira.

As Cain tries to apologise, he struggles to open up.

Can either Aaron or Cain come to terms with their feelings while in lockdown?

Danny and Jeff open up

Danny Miller, who plays Aaron said: “I felt honoured that Jeff and I were trusted with an episode telling the story of being in lockdown together.

“As a man, I can say first-hand how difficult it is to talk in general. With the lockdown and the scary reality of the virus being thrown in there, it makes it ten times harder to offload and share feelings.

“I’m glad the producers and writers took two of Emmerdale’s characters who like to portray ‘two men who don’t like opening up’ to address how easy it can be when that burden is lifted by having a simple conversation with one another.”

Cain actor Jeff Hordley added: “It is just not in Cain’s DNA to open up to people. But in this episode Aaron carefully constructs a way to try and get him to open up.

“As the episode progresses we see in fact the pair of them shift from how they are at the beginning to the end of the episode. It is cleverly written.”