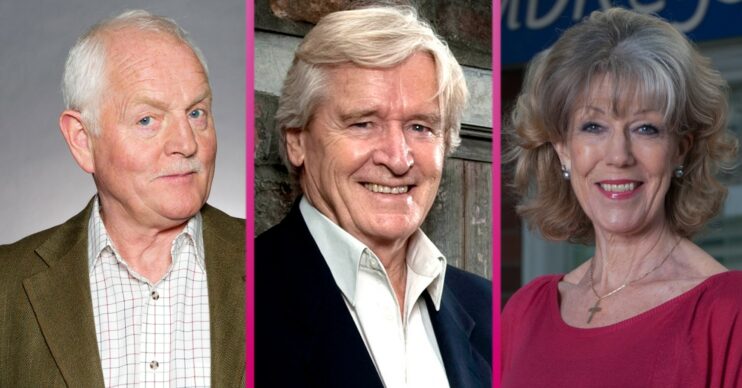 From Coronation Street to Emmerdale: The 8 longest-serving soap stars

Soap land is an incredible place because it’s one of the only ways you can see the same actors playing the same roles for decades on end.

While films can cover entire lives in just two hours, soaps let you into the lives of their characters week after week for years.

The actor appeared in the very first episode of Coronation Street way back in 1960.

He has played Ken Barlow for 62 years making him the longest-serving soap actor in the world – and in history.

Bill has previously told how he has no plans to retire and wants to still be acting on the show at 100.

And at 89 currently he shows no signs of slowing down.

Only surpassed by the retired Eileen Derbyshire, Barbara is still going strong playing the newsagent everyone loves to love.

The one and only Gail Platt made her debut on Corrie’s cobbles in 1974.

Actress Helen has played Gail for 48 years so far – and she shows no sign of slowing down.

Now one of the most recognisable faces on television, her role has led to a huge on-screen family second only to the Barlows.

It may not seem like it but Sue Nicholls joined Coronation Street after her on-screen daughter.

Sue arrived as Audrey Roberts in 1979 with various stints until 1985.

Then she joined full-time and has played her ever since making this her 38th year on the cobbles.

In 1983 Kevin Webster walked onto Coronation Street for the first time – and he’s been there ever since.

For 38 years actor Michael Le Vell has played the mechanic with a heart of gold and occasional loverat.

He is the second longest-serving male Corrie character behind the one and only Bill Roache.

While Adam is technically on a break from EastEnders – he is the show’s longest serving character.

And the nation’s sixth longest serving soap star having made his debut in the very first EastEnders in 1985.

He lasted until 2021 when he took a break from his role as Ian Beale but he is widely expected to return soon.

Corrie’s own Sally Metcalfe is played by actress Sally Dynevor.

She has appeared on the cobbles since 1986 when she arrived as Kevin Webster’s new girlfriend.

It’s now 36 years later and she’s still playing her namesake on the cobbles.

The only name on the list from Emmerdale is Chris Chittell.

He made his debut in 1986 and has been around ever since.