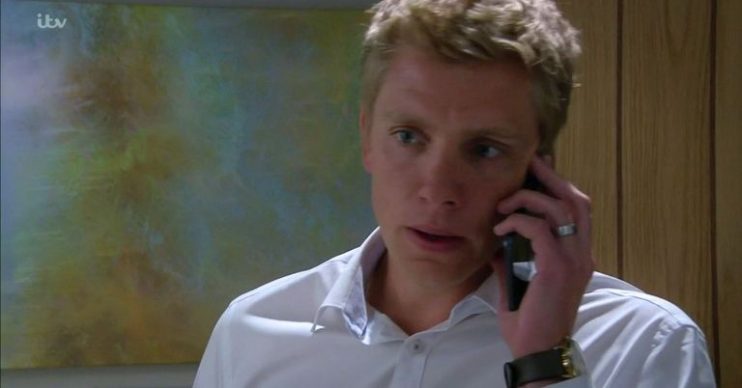 Emmerdale SPOILERS: Robert’s exit plot ‘revealed’ as he goes on the run

Aaron's set to go with him too

As he awaits sentencing Rob’s facing up to five years in prison, and with actor Ryan Hawley’s exit approaching, it seemed likely that that’s how we’d bid farewell.

In a set of teasers released for Emmerdale’s traditional October big week they have confirmed Robert’s plans to escape justice and go on the run.

Realising the dire set of circumstances he and Aaron find themselves in, the couple decide their only option is to flee.

Desperate to stay together, Aaron is set to go with him to avoid having to visit his husband in jail for years to come – or worse, never seeing him again if he goes on the run alone.

But given the fact Aaron actor Danny Miller has confirmed he is not leaving the soap when his on-screen hubby does, something tells us their plans won’t work out.

Unless of course, Danny has been fooling us and he is really leaving too…

Will Robert end up on the run alone if Aaron decides he can’t leave his mum, Chas – who is also due to give birth during the big week – and sister Liv behind?

Or will he get caught and given an even longer jail sentence? Or could he even die before he leaves?

Fans have lashed out at the plot as they feel it’s giving the wrong impression in that the rapist is not being jailed, yet Robert is.

Robert’s sister, Victoria Sugden was assaulted during a night out and due to the fact there was no evidence, the CPS couldn’t prosecute her attacker, Lee.

Victoria has since discovered she’s pregnant with Lee’s baby and has decided to keep it.

Lee and his mum, Wendy, have been harrassing Victoria, trying to get her to take back her rape claims and Lee even demanded she pay him off in return for him giving up his rights to the baby.

But when Lee made nasty remarks about Vic to Robert, all-but confirming he did rape her and he would do it again to someone else, Robert lashed out and hit him over the head with a shovel.

At first Victoria backed up Robert’s story that it was self-defence, but when it came down to it, she realised she couldn’t lie in court as that would make her as bad as her rapist.

Robert accepted the decision graciously, knowing he couldn’t put her through any more pain.

Read more: Emmerdale fans fed up of Moira and brand her a hypocrite

It led to his decision to plead guilty, in order to secure a lesser sentence.

But it seems he doesn’t want to face a sentence at all.

Will Robert get away? And will Aaron really leave with him?