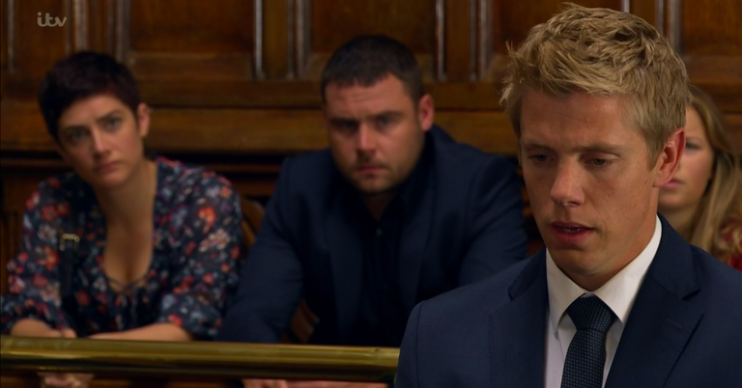 He faces at least five years in jail

Robert Sugden is in a tricky spot. The Emmerdale favourite pleaded guilty to manslaughter with intent last night, to save his sister Victoria the turmoil of testifying in court.

But, as a result, Aaron was left devastated – knowing that his husband now almost definitely faces time inside a prison cell for beating Vic’s rapist Lee Posner.

On Thursday (September 5), Robert surprised everyone – including the viewing public – when he announced a guilty plea in court.

Thinking he was doing the right thing by Vic, he attempted to calm Aaron down by insisting there was a silver lining… He would only be sentenced to five years in jail, instead of a life sentence.

As the family sat down to discuss his momentous decision, and the effect it would have on their future, Robert seemed to have made peace with it.

However, in a later scene, Robert threw a curveball at fans when he slipped off in secret to make a furtive phone call.

In hushed tones, Robert rang Cain Dingle, saying: “I need to get my hands on some money, serious money, and I don’t care how.”

While some fans believed Robert was trying to secure some cash to provide for his family’s future while he’s locked up, others predict he’s planning to do a runner.

One fan said: “Robert’s asking Cain to get him some money? Robert’s going on the run!!!”

Another agreed, writing: “Yassss Robert, rather he goes on the run than prison. Aaron will be devastated, though.”

A third added: “Robert’s either going on the run or getting the money to make sure Aaron, Liv, Vic and Seb are okay.”

“So if Robert is going on the run, then that means he could come back in future if that is what Ryan chooses to do,” suggested another. But another disagreed, saying: “If they go with on the run, Robert will never be free to return to Aaron.”

Robert's either going on the run or getting the money to make sure Aaron, Liv, Vic and Seb are okay #Emmerdale #Robron

So if Robert is going on the run then that means he could come back in future if that is what Ryan chooses to do. #Robron #Emmerdale

#Emmerdale Robert’s asking Cain to get him some money?

Robert going on the run? Or wants money for Aaron, Seb, Vic and Liv. #Emmerdale

Robert planning to do a runner?? 😱 #emmerdale

Emmerdale are keeping the exact time of Robert’s exit a closely guarded secret, but it could be any day now.

Is this how actor Ryan Hawley will be written out of the soap after five years?

Do you think Robert will do a runner? Leave us a comment on our Facebook page @EntertainmentDailyFix and let us know what you think!