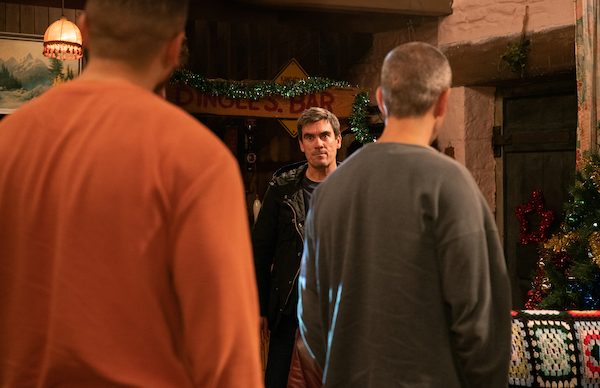 Nate has got his feet under the Dingle table

There’s more drama heading for the Dingles in next week’s Emmerdale as Cain Dingle finds himself ousted from the family.

With Cain’s hate for Nate Robinson growing by the day, things are certainly tense between the pair in the run up to Christmas. And next week sees things get even worse when Cain’s own family appear to turn their backs on him.

While Nate might be his secret son, his affair with Moira Dingle is still fresh in Cain’s mind, and no amount of apologising from Nate is going to change his dad’s feelings about their doomed relationship.

And Cain will up his vendetta against Nate when he asks Amy Wyatt to try and groom their son Kyle into being afraid of Nate.

Amy is annoyed about being drawn into Nate and Cain’s feud, and Nate is angry when he discovers what Cain has asked her to do.

He heads over to see Cain, determined to have it out with his dad, but as things get heated between the pair, their fighting solves nothing.

However, Sam sees the argument between them and when Nate says something about family, it gives him food for thought, and soon Sam softens towards Nate and offers him his support.

But while Nate is getting his feet under the table at the Dingles’, Cain is about to find himself on the outskirts of the family when Chas asks him along to a pre-Christmas gathering with the family.

When Cain arrives he is fuming to see Nate is there already, and it doesn’t take long for Cain to lash out, telling the Dingles to go to hell before storming out.

But things are only set to get worse for the family when later Charity invites Nate for lunch in a bid to wind up Cain.

Will her plan work? Or is she about to find herself on the receiving end of Cain’s wrath?

Do you think Cain will ever forgive Nate? Leave us a comment on our Facebook page @EntertainmentDailyFix and let us know what you think!