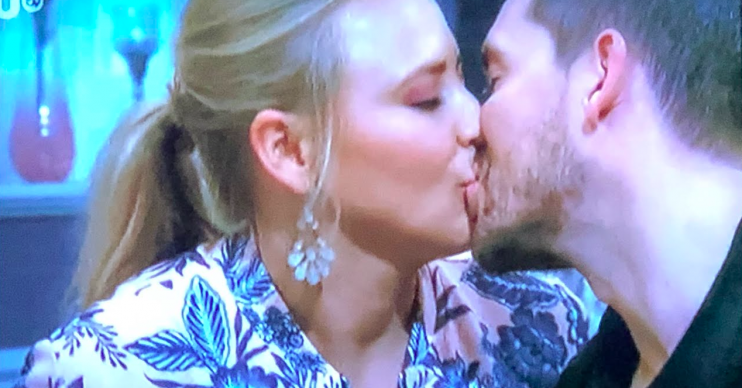 Will Tracy ever get her happy ending?

Tracy Metcalfe and Pete Barton finally admitted they had feelings for each other in Emmerdale last night, and shared a passionate snog.

On Thursday night (November 28), after a disastrous meal at the Woolpack, Charity was forced to intervene as the course of true love was NOT running smoothly (mainly due to Charity’s advice in the first place!).

Viewers know that Charity had told Tracy to play hard to get, but Tracy was taking it WAY too far – pretending she had a surgeon for a boyfriend, who “saved children’s lives”.

As Pete became more and more despondent, Charity realised she had to pull out all the stops, telling the pair she needed some customer survey forms filling in around the back.

Once there, she told Pete that Tracy had been lying about her perfect boyfriend, and told them they both fancied the pants off of each other.

Read more: Emmerdale SPOILERS: David to find out about Maya’s baby at Christmas?

As soon as Charity left them to be alone, the pair shared a kiss – and the rest!

But those watching from home predict the pairing will end in tears, as Pete will soon be leaving the village.

Gutted that Tracy is likely to be unlucky in love again, one fan wrote: “Just means Tracy is going to have her heart broken again.”

Just means Tracey is going to have her heart broken again 😠

tracy and pete are adorable and i ship it hard 💖 CAN HE STAY? 💔😫 #emmerdale #pacy pic.twitter.com/NC6yqbkjU5

I am gutted Pete is leaving though. Him and Tracy are 🥰 #Emmerdale

Another said: “Makes me sad as Pete is leaving.”

A third asked: “What’s the point in putting them together when Pete’s leaving?! More doom and gloom when Tracy gets her heart broken.”

“About time!! Just a shame that Pete is leaving poor Tracy,” said one more, while another said: “And they didn’t live happily ever after… So what is the point?”

Anthony Quinlan, 34, recently announced he would be leaving the Dales after six years.

Anthony joined Emmerdale in 2013 as John and Moira Barton’s nephew.

He had previously played Gilly Roach in Hollyoaks.

We recently told you that Anthony has already begun filming his next role.

He will star in short film Asphixiate alongside Michaela Longden, who wrote and co-produced the film.

Confirming his new role, Anthony wrote on Instagram: “Scene rehearsal of @asphyxiateshortfilm starring myself and the incredibly talented @kaylaginge who also wrote and co-produced this fine piece of film.”

Do you predict heartache for Tracy Metcalfe? Leave us a comment on our Facebook page @EntertainmentDailyFix and let us know what you think!