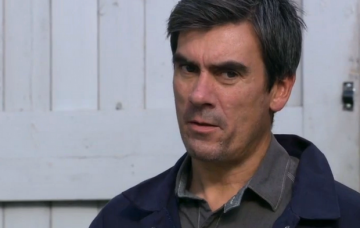 His absence will be very keenly missed

If you watched last night’s (17.10.18) Emmerdale, you will have seen soap favourite Cain Dingle decide to leave the village after struggling with the guilt of killing Joe Tate.

(He of course doesn’t know that Graham is the true murderer.)

While many viewers were upset by Cain’s selfishness, asking how he could leave with his family are going through so much heartbreak, many were heartbroken at the fact that he decided to leave (after all, he is a definite favourite).

Well, we are SURE he won;t be gone for long, but here’s a few things we’ll miss while he is gone…

1) His relationship with Moira

Cain and Moira have had a rocky relationship. But we can firmly say they are definitely one of Emmerdale’s favourite couples – the passion, mutual respect and challenge is compelling.

2) His brilliant one liners

Over the years we have heard some brilliant one liners from Cain. His most recent came as he was about to come to the aid of Ryan Stocks, who looked set to attack Charity’s rapist DI Bails (who is also his biological father) with a wooden pole. All Cain had to respond to that was: “Nice one. Looks like you’ve got this Ryan.”

Cain Dingle has come a long way from the hard man who was introduced 18 years ago. He’s definitely shown his soft side now he’s a father and a grandfather. We often see him visiting granddaughter Sarah Sugden in hospital and spending time with his children Debbie, Kyle and Isaac.

Everyone knows that Charity and Cain have had a roller-coaster of a relationship. However, Charity was recently the centre of a difficult storyline.

After revealing she was raped and abused by corrupt cop DI Bails when she was just 14 years old, she reported the crime which ended up being taken to court. When she was struggling with the whole ordeal, it was Cain who stepped in and gave her the strength to plow through.

5) He takes nonsense from no one!

We can all agree Cain Dingle isn’t one to make empty threats.

6) He’s very protective of his family

We’ve seen Cain Dingle’s caring side and his dark side. But when the two sides come together you see his protective side. Like most dads he just wants what’s best for daughter Debbie and doesn’t like to see her messed around. Just look at what happened to Joe Tate, when he thumped him one.

Cain’s character has definitely become more understanding since his arrival. When his wife Moira’s daughter Hannah returned to the village now living as a man named Matty, Cain was the one who was more accepting of his step-son and tried to help Matty rebuild his relationship with his mother.

Let’s face it. The actor Jeff Hordley is very easy on the eyes…

Will you miss Cain Dingle? Leave us a comment on our Facebook page @EntertainmentDailyFix and let us know what you think!