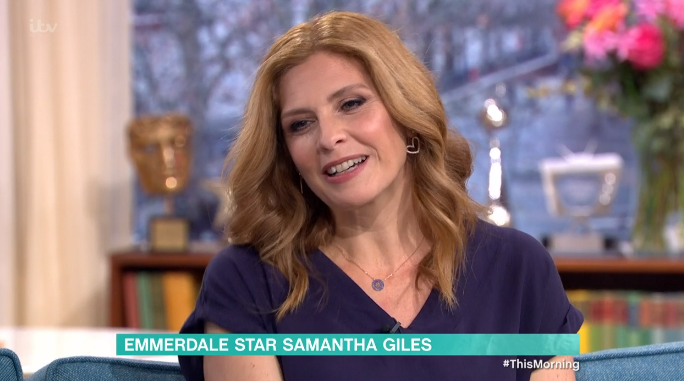 Bernice Blackstock called off her wedding to Liam Cavanagh last night and departed Emmerdale for Australia.

While fans were left heartbroken over her exit as she went to care for her ex-husband, father of daughter Dee Dee, who’d had an accident, actress Samantha Giles has revealed it might not be the end after all…

Speaking on Friday’s This Morning (November 29) to hosts Eamonn Holmes and Ruth Langsford, Samantha said she would never rule out a return.

“I’ve said so many times ‘I wouldn’t do this, I wouldn’t do that’ and you end up doing them, so never say never,” she told Eamonn when he pointed out she could go back.

But her next project might not be acting – she told the hosts she’s written two children’s books.

The stories are inspired by the other side of her life where the actress practices witchcraft.

Samantha is a witch and uses wicker spells and charms and even told how she cast a spell to meet her ideal man – and then her husband came into her life.

It was also revealed This Morning’s Sharon Marshall credits Samantha with helping her to have her miracle baby, Betsey.

“I gave her a change of luck charm which she used to help with the IVF,” Sam admitted.