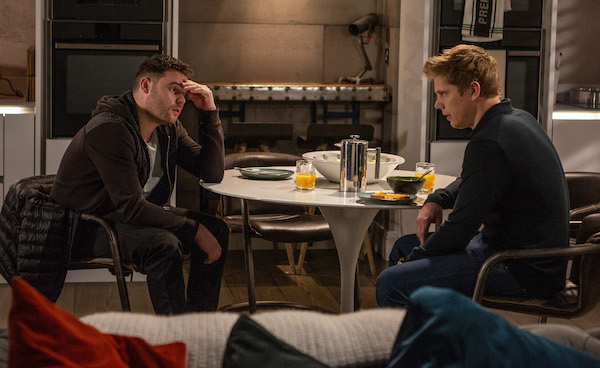 Is this the end of Robron?

Robert Sugden turns husband Aaron Dingle’s life upside down in next week’s Emmerdale when he confesses he could be facing life in prison for attacking Lee Posner.

For weeks Emmerdale fans have watched in horror as Victoria Sugden’s rapist Lee blackmailed her for money in return for having nothing to do with the baby she’s carrying.

But just when it looked like Victoria, Robert and Diane were going to hand over the cash to get rid of Lee once and for all, Robert saw red when he made sickening remarks about the night he raped Victoria, and  a fight between the men soon broke out.

While Emmerdale fans were pleased when Lee got his comeuppance as Robert hit him with a shovel, things soon turned sour when Lee failed to get up from the floor and it appeared his injuries were much more serious than anyone could have imagined.

With Lee in a coma, Robert was charged with grievous bodily harm… but instead of telling his family the truth that he could still be facing life in prison, he lead them all to believe that his future was safe.

But the pressure of keeping a secret so huge becomes too much for Robert next week, and he soon finds himself confessing everything to a heartbroken Aaron.

Robert worries when Cain overhears him talking to his solicitor and tells him he won’t lie to Aaron about his possible life sentence.

With Cain being one of the worst people in Emmerdale to know your secrets, Robert realises it is only a matter of time before his husband finds out the truth and decides to come clean.

But before Robert can make his confession to Aaron, he is shocked when Liv has a seizure and Paddy, Marlon and Cain all rush to her side.

Robert is terrified by Liv’s collapse and is frozen in fear as everyone else gathers to help her, but things are only set to get worse for the family.

At the hospital, Aaron is beside himself as the doctors look after his sister… but while his mind is on Liv, nothing can prepare him for the fact Robert is about to drop the most ginormous bombshell.

Aaron is speechless when Robert confesses he could go to prison for GBH with intent… and that the maximum sentence is life.

Aaron lashes out at his husband, fuming that he kept something so huge from him. But where does this leave their marriage? Will Aaron still stand by Robert despite his lies?

And what about Victoria and Liv?

With Aaron now in the know, it is only a matter of time before everyone else finds out about Robert’s bleak future… will he find it in himself to confess everything to the rest of his family?

How do you think Victoria will react to the news Robert could be facing life? Leave us a comment on our Facebook page @EntertainmentDailyFix and let us know what you think!