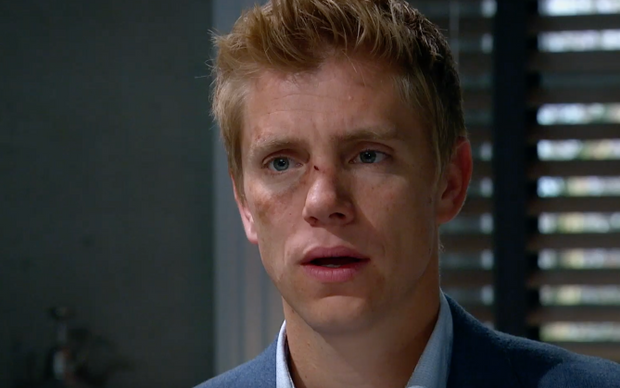 And he lied to husband Aaron about it, too!

Emmerdale fans were furious last night, when Robert Sugden was told he faces life imprisonment for his attack on Lee Posner.

Viewers have already complained about Victoria’s rapist being portrayed as a victim, but the news that Robert could go down for life in a twisted tale of justice was a step too far.

On Thursday (August 8), Lee woke up from his coma and accused Robert of grievous bodily harm, with intent.

Claiming Robert and pregnant Victoria have a sick vendetta against him and the attack was unprovoked, he made sure Robert faced the maximum penalty for attacking him if convicted – life imprisonment.

After Robert heard the devastating truth from his lawyer, he headed home to face his loved ones, but decided to lie about the severity of his situation.

Husband Aaron Dingle asked him: “What you gonna get? A year? We can handle a year, can’t we?”

Robert replied: “Yeah of course we can. All be behind us in a few months.”

He then suggested they look for another surrogate, adding: “Yeah absolutely, we just need to make it happen.”

Viewers know that Robert hit Lee over the head after the rapist goaded him about his sister and tired to extort money out of the family.

Actor Ryan Hawley, who plays Robert, will be leaving the ITV soap at the end of the year but fans will no doubt be raging if he leaves the Dales in a prison van.

One livid Emmerdale viewer even threatened to stop watching, tweeting: “Emmerdale, please don’t do this! Please don’t have Ryan’s exit be a prison sentence for this.

“You will only be turning a rapist into a victim. It’s with a heavy heart I say this but, if that happens, I’ll no longer be able to support Emmerdale as a programme and I’m sure I’m not alone.

“I’m sorry, but I just can’t get behind any programme that would do that. You still have time to change this. Yes it’s been done before, but can you not have him go on the run like Andy and Adam? Please I’m begging you. Think of the message this is sending to rape victims.”

Im sorry but I just can’t get behind behind any programme that would do that. You still have time to change this. Yes it’s been done before but can you not have him go on the run like Andy and Adam? Please im begging you 🙏 Think of the message this is sending to rape victims.

Another said: “I could handle Lee not being punished for raping Vic because, sad but true, not all sexual assaults get what they deserve.

“But to make the scum the victim and Rob the bad guy in this is the most vile and despicable bit of storytelling you’ve done.”

A third blasted: “And the rapist walks free? Are you serious?!”

“So let me get this straight,” said one more disgruntled viewer. “The police couldn’t charge Lee with rape because it was he said/she said and no evidence, but they can charge Rob based on a he said/she said with no evidence. This storyline is a disgrace and anyone who thought it was a good idea should be ashamed of themselves.”

We know Ryan is leaving but it's too obvious that Robert will go to prison for life. There has to somehow be a twist. Somewhere. #robron #Emmerdale

However, some fans aren’t convinced Robert will be convicted.

One optimist wrote: “We know Ryan is leaving but it’s too obvious that Robert will go to prison for life. There has to somehow be a twist. Somewhere. #robron #Emmerdale.”

Will Robert be charged and found guilty of GBH with intent? Or do the scriptwriters have more twists planned?

How would you like to see Robert Sugden leave Emmerdale? Leave us a comment on our Facebook page @EntertainmentDailyFix and let us know what you think!