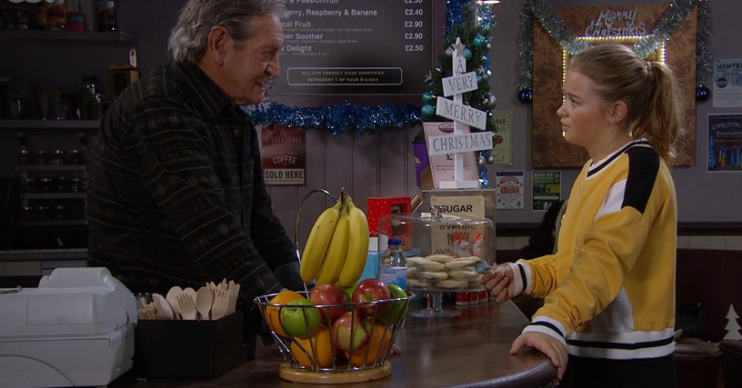 Liv didn't get any change from a £5 note

Fans of Emmerdale were shocked as they spotted Liv Flaherty paying £5 for a bottle of water.

In last night’s episode of the ITV soap (December 11 2019), cafe worker Rodney tried to rope Liv into joining in with the pantomime as she went to buy a drink.

But viewers weren’t interested in their conversation, they picked up on something else entirely…

They noticed Liv paid £5 for a bottle of water and received no change!

Fans were quick to point out the extortionate price on Twitter.

Bloody hell. Fiver for a bottle of water in the cafe?!? #emmerdale #liv @emmerdale 😳

Liv seemed oblivious to the cost though and afterwards went to sit down with her brother Aaron, confronting him about his sleeping habits.

She encouraged him to start sleeping in his own bed again as she was concerned for his well being.

Liv just paid £5 for a bottle of water…

Robert attacked Lee Posner, the man who raped his sister Victoria, resulting in her getting pregnant.

Lee ended up passing away from his injuries and Robert was sent to prison.

Since being locked up, Robert has cut contact with Aaron and sent him divorce papers, leaving Aaron heartbroken.

Whilst dealing with the heartbreak of her brother being sent away, Victoria has also had to deal with Lee’s mum Wendy moving to the village.

Aaron and Victoria have been secretly plotting to drive her out of the village, but with her determined to stay, will their plan work?