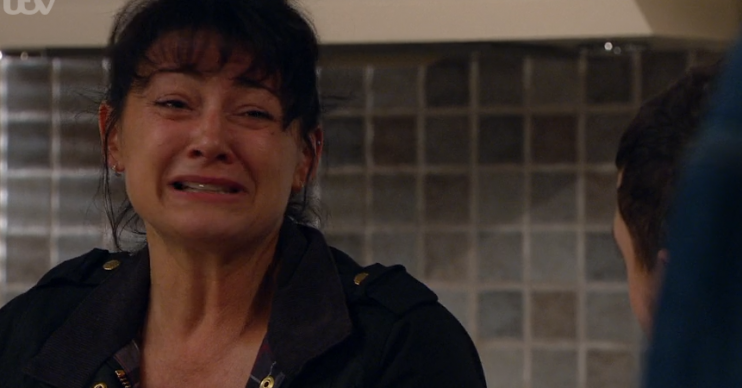 As Nate is welcomed into the family fold

Moira Dingle is set to spend this Christmas alone in Emmerdale as her family continue to shun her and her drinking spirals out of control.

Cain’s estranged wife has had a hard time of late, though arguably of her own making.

After she began an affair with farmhand Nate, it was then revealed that Nate was Cain’s secret son and had seduced Moira to get back at the father he thought rejected him.

Cain exacted his revenge on a boat in the middle of a lake, which then exploded.

Although everyone survived, Cain has since banished both Nate and Moira from his life.

Moira begged him to take her back, but when he refused, she started drinking and Cain has since stopped her from seeing the kids.

With Moira at rock bottom, last week she blew a potential business deal by being drunk and inappropriate.

Even loyal ally, nephew Pete Barton, has deserted her and accepted a partnership with Nate on Wylie’s Farm.

With Cain refusing to let Moira have access to the children she has been trying to sort herself out.

But on Christmas Day, she reaches a new low when Cain accuses her of being drunk.

It turns out, she’s actually only had one drink that day and he’s wrong, but as the former couple argue, Moira ends up spending Christmas alone.

Meanwhile, Nate is also feeling sad to be excluded from the Dingles’ Christmas plans.

The family have a typically happy and chaotic Christmas, despite it being their first without Lisa, and even extend an invite to Nate at the last minute.

How will Cain react to his son’s arrival? Can they bury the hatchet and move forward?

And how will Nate being chosen over her affect Moira’s mental health?