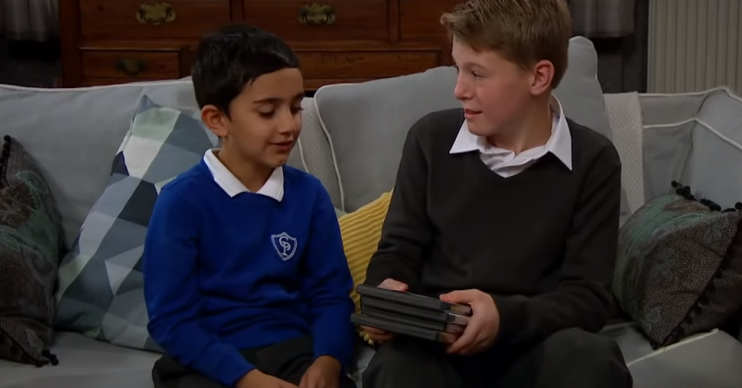 Child actors Alfie Clarke and Kai Assi, who play Arthur Thomas and Archie Breckle in Emmerdale might be enemies on screen, but they are “best buddies” in real life.

Alfie’s mum, Fiona, posted a photo of the two boys happily smiling in what looks to be a cafe.

Alongside the photo she tweeted: “Best buddies.”

One wrote: “Good to see you are friends! Both are good actors. Hope you are in Emmerdale for a long time to come.”

A second tweeted: “Ahhh this picture is super cute.”

Another said: “Very talented boys! They’re doing a great job with this storyline.”

Whilst in real life the boys appear to be good friends, their current storyline in the ITV soap has seen Arthur bullying Archie.

For the first few weeks of living with his dad, Archie never spoke a word until Arthur managed to coax him out of his shell.

Later when Laurel and Jai were checking his injuries, assuming he fell off a chair, they spotted more bruises on his arm.

When Arthur and the other kids began picking on Archie, the little boy slapped Jimmy’s daughter Angelica.

Later as he tried to tell Jai and Laurel his reason for hitting Angelica, Arthur stopped him and later told him everyone would be happier if he left, encouraging him to go live in the woods.

Poor Archie believed Arthur and packed his bags, later running off into the night.

With Archie now missing, will Arthur be forced to come clean about how he’s really been treating Archie?